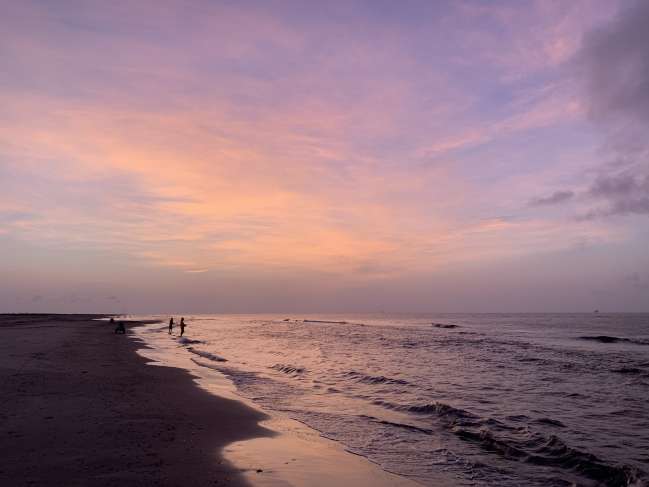 My cousin, a buddy, and I made a run to Grand Isle yesterday to try and get into some speckled trout surf action. Although we knew the tide wasn?t going to be a favorable one AND it would be on the ?warm? side, we were hell bent on giving it a try. We started with a stop on Elmers Island and headed right (west) as the sun was beginning to come up. There were some pockets of small bait fish moving but it seemed to be filled with preying catfish and no speckled trout. We were throwing a twitch bait (or suspended bait...I guess is the proper term??) and we foul hooked a catfish what seemed like every 5 casts or so in that particular spot. Not happy with that result of course, we kept moving down the beach until maybe 7:30am and after only one keeper (spec), we made a decision to move to Grand Isle in hopes we could fish at some structure (aka the rocks). Our next stop was towards the end of the island near the fire station. I suppose it was approaching 8:30am (or just after) by the time we got in the water. As we were walking over the levee we could immediately see a different scene with boats at damn near every set of rocks, dolphins (or porpoises?? We will come back to that in a second), and bait moving around. Again relying on our twitch bait, we started casting and pretty quickly hooked up on some specs....not keepers, but fish none-the-less. We were at the ?phase? in our fishing trip mindset that a throw back was better than nothing. In the ended up with five keepers, a bunch of throw backs (maybe a couple dozen?), a monster black drum, some lady fish (one of which resulted in getting a treble in the finger pretty good...that wasn?t fun extracting that bad boy), and our buddy grabbed about 2 dozen crabs with his drop nets. I?m the end, we learned some stuff, questioned other fishing theories, told some BS stories, and started planning Our next trip. We hope to be back next weekend when there is a much more favorable tide and hopefully good wind conditions.

Hope everyone had a fun and safe day in the water.
Reply

bigjim
Awesome report. I have surf fished there a lot and Iâ€™ll tell you what works good for me if you want to fill the basket. I like double rigged split tail root beer beetles H and H and next would be double rigged shrimp creole Or ultraviolet matrix shad. You wonâ€™t catch many real big trout on this but you will fill basket quickly. Once you hook one real that fish slow until you get a second. The first fish attracts many more so you should be able to double a lot. The root beer beetles resemble brown shrimp very well. I know Iâ€™ve caught over 10,000 specks on them.
Reply

picknhand
Awesome tip! Will pick some of those up this week. When you say you fished this area a lot, do you mean Elmers or Grand Isle (or both). We are debating whether we hit Elmers first or Grand Isle first next weekend.
Reply

Average Joe
Either beach is good. Most of the bigger fish have moved off shore into cooler waters. Once the calendar hits July, beach is filled with school trout, ladyfish, catfish, and the dreaded sharks. The best times to fish the beaches are April- mid June. After that, the trash moves in. Great tip on the tandem root beer beetles. They are deadly. Good luck.
Reply