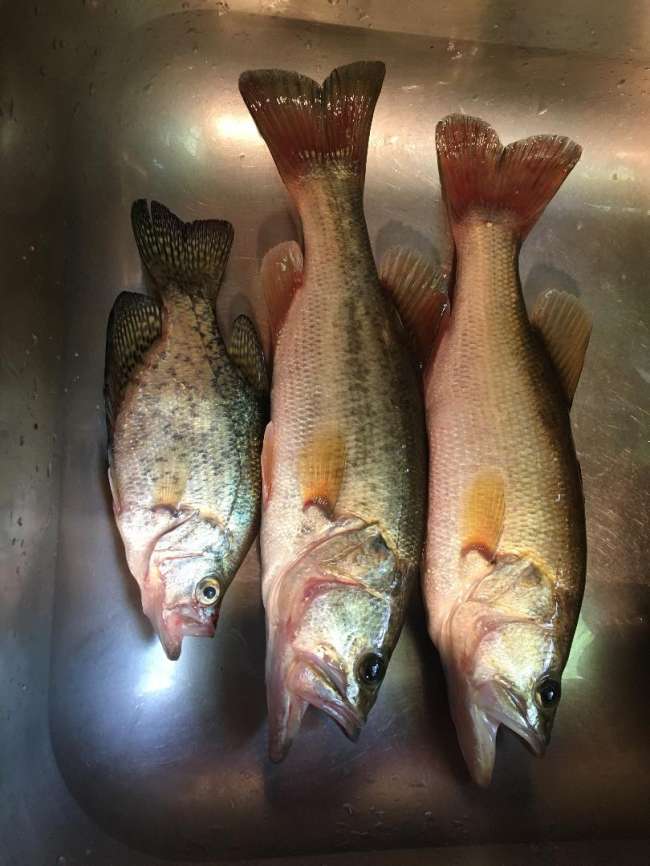 Had relatively short window of opportunity this am,wanted to head back to T-Funky in Chapman pirogue and was hoping to replicate yesterday's results.Got a tad earlier start,hit fish magnet right away and missed a few unidentified fish,most likely big ole slabs and finally hoisted decent one aboard and slowly paddled S after fish magnet unfortunately gave up only two tiny Kentucky bass and almost took pic of bass much smaller than the worm inhaled!!Switched from Spoiler Shad to Zoom Speed Worm,JuneBug Red and nabbed two almost back-to-back decent bass correctly guessed to be close to 1lb each and guess de light switch and heat switch went off and on respectively!!!Got brutally hot and only fished from shade before 6:00 am to about 8:45 and headed for de homestead.Did chat with gent who complained about the trash folks insist on leaving AND the rotting frog carcasses(almost picked em up to toss in river for catfish,etc to devour)!!Hope to join CCAguns tomorrow as he wants to show me some red/bass hot spots using Ribbit frogs and got fine dark Spro to toss at dem fish.Did have at least two blow-ups on Spro but once again could tell these were fish no where near big enough to gobble up dat Spro!!!Ole T-Funky slowly but surely starting to clear a tad and perhaps I coulda stuck to spot where bass came from but Tim,from yesterday,advised that the T-Funky water near Beau Chene much better and I did paddle to a few curves from Beau Chene,quite a paddle from 3 Rivers Rd launch!!

Mandevillian
Re: T Funky Results 7 14 2020
Thanks,Wiz,heat was brutal today much hotter than yesterday and do not know how we dealt with this heat in the days when we did NOT have AC😬Missed the first few fish that nailed Spoiler Shad at fish magnet and pretty sure they were huge sac a lait !