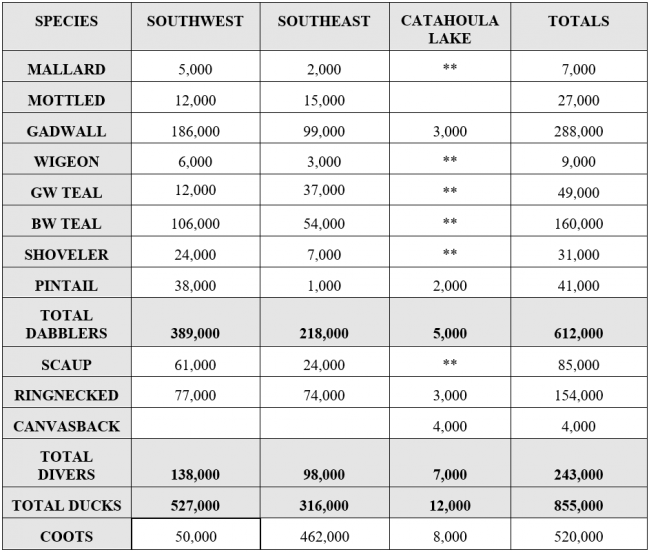 In SW LA, the only notable concentrations of ducks on the transects were a group of mostly scaup seen in flooded fields north of Intracoastal City and a flock of mostly gadwalls in the marsh of Paul J. Rainey/State Wildlife Refuge. Another concentration of ducks was noted near Black Lake west of Hackberry but was off-line and not included in the estimate. In SE LA, the only notable concentrations of ducks were ring-necked ducks east of the transect in Upper Terrebonne southeast of Amelia and scaup in Lake Borgne between lines 25 and 26.

Habitat conditions in all 3 surveyed regions have been negatively impacted by multiple hurricanes and other storms. Water levels are still high in most of the coastal marsh, there is virtually no seed-producing annual vegetation, and submerged aquatic vegetation is sparse across much of the surveyed area. Only spotty submerged aquatic vegetation was evident in SW LA. Good submerged aquatics were seen in the Upper Terrebonne marshes and south of Delacroix, but it was greatly decreased from the September survey in most other SE LA marshes. Water levels at Catahoula Lake have recently declined to target levels, but the abundant moist-soil vegetation and excellent habitat conditions noted in September were compromised. In contrast, there was noticeably less shallow flooding in the agricultural area of SW LA than seen in September. Most available habitat was managed water for rice and crawfish.
Reply