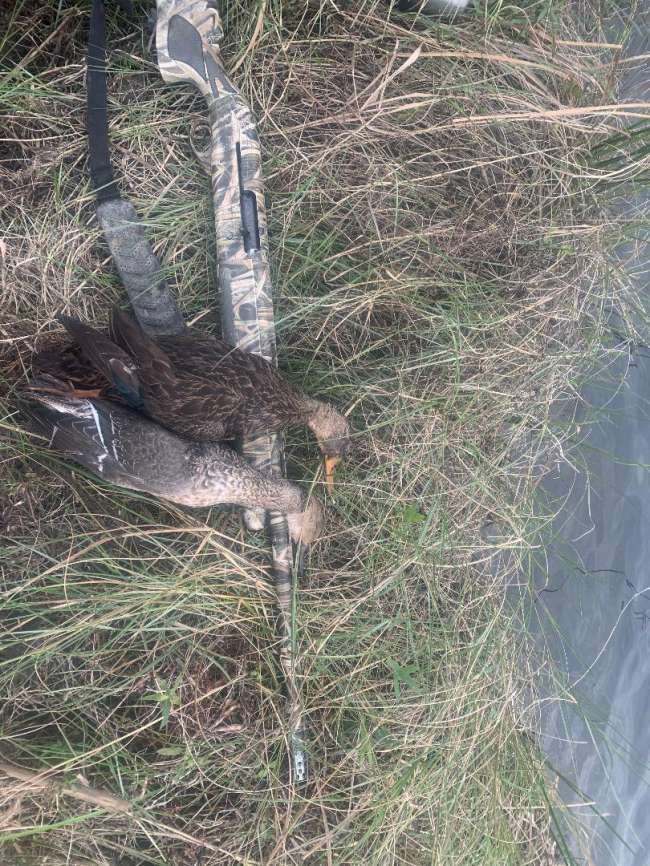 De Nuck and Futz Duo been after de ducks since E Zone Opener and so far been very inconsistent and just yesterday I spotted at least three huge flocks of ducks,noted about where they emerged from and decided to make somewhat of an excursion to try my best to thin out the duck population!!!Saw a miniscule amount of ducks,was as always,extremely well-hidden and spotted two fine pairs of mottled ducks,hit a few quick notes on DC Countdown(call it my ATT call)and wouldn't ya know it,dem mottled ducks made a bee-line for my dekes,I dropped call as one pair soared by(thinking dey was in de clear)dropped one that fell hammer-dead,landing in thick pile of mud and I quickly retrieved trophy and shot Nuck a pic and we made de executive decision to quit around 8:45.Just as I was about to dismantle palmetto blind,saw solo pintail headed right for me and dispatched fine hen pintail(did have four green wings land behind blind,heard splashing and they were gone in a flash)!!!Got confirmation call from Medicare Client and was actually chatting with him as I picked up dekes and joked with him about the kamikaze blue wings that about took my head off and he joked dat I needed to re-blind and I advised de ole body wearing out from plenty hunts where I typically make close to 1 mile paddle!!!Nuck ended up on de short end of today's hunt(typically reserved for me)!!!Hate DNF hunts and have absolutely no idea where the flocks of ducks I saw yesterday went!!!Got two more First Split hunts left and gladly take two trophies today vs bunch of coots or scaup!!