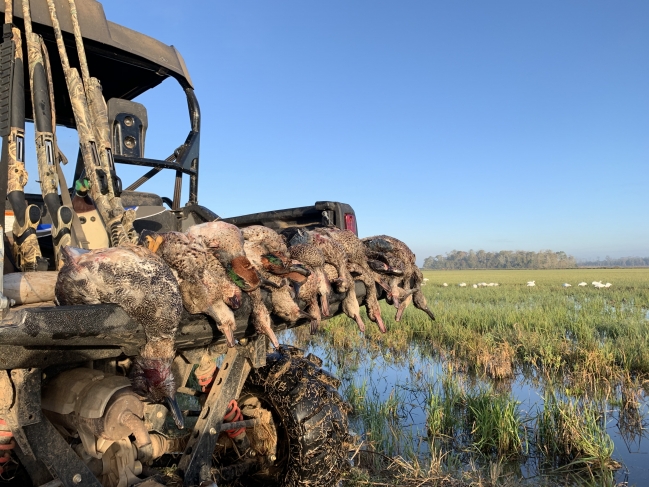 Hunted Thurs, Fri, and Sat last week to wrap up what turned out to be a pretty decent first split.

Log says it was 114 ducks on 13 hunts, included one DNS hunt on 12/3, and two hunts of 3 ducks or less. That includes the TWO ducks killed on the coastal zone opener, by far the worst opening day I've ever seen.

All that said, this split total is the highest since the very strong 2012 season (133 ducks), and the second highest first split total on my log kept since the 2002 season. We are hunting both coastal and east zones, alternating between ag land in central La and SE La salt marsh, both public and private.

After being way up last year, mottleds are way down this year. Think it directly correlates to the 100 mph hurricane that plowed through the Delacroix/Hopedale hunting grounds as usually we kill a few. We killed one on opening weekend but haven't hardly seen one since then.

Grays are way up, already surpassing a lot of other seasons' totals for both splits. Blue wing teal are also up, and we had noticed that green wings hadn't really shown up yet but the blues were thankfully there.

We'll rest up and look forward to the second split opener on Dec 19.
Reply

Delta Duckman
Good to see you all are getting some gray ducks as our season is the opposite for them. It seems the gray ducks are rather concentrated, if you have them the good times will roll if not, not much will change. Good report on the season.
Reply

Darren Digby
And strangely enough, I'm hearing of tons of reports like yours in Delacroix of 'can't keep the dosgris out' but we've killed all of three, just aren't even seeing them.....and we have big water nearby. Sure its nice when you can pass on them, but I'm certainly not above shooting them, we are duck hunters.
Reply

the dredger
looks like some good hunts man congrats ,hope it continues for the second split
Reply

Mandevillian
De Nuck and Futz Duo did not shoot that many ducks First Split but highlights certainly were memorable with Nuck's fine take yesterday of greenhead and nice pair of greys and on one decent hunt managed nice pair of greys and this past Th got Pintail and Mottled duck hen but few big ducks,at least where we have been hunting.Guess other highlight was Opening Day when Nuck got his limit,all teal and I managed 5 teal.Think our totals are about 29 ducks total,not stellar by any stretch!Congrats,Darren,know young diehard that has killed about 437 ducks First Split,more than awesome results,lotta pintails,canvasbacks and tons of greys for this fellow!

P.S.AJ's recipe for smoked duck is more than incredible,gonna try it on wonderful scaup!!
Reply