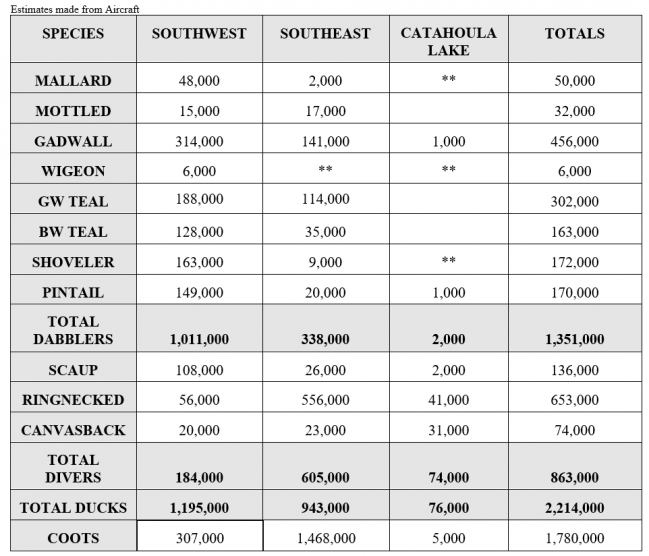 The 2.21 million ducks estimated on this survey is over 2.5 times the 855,000 seen in November, but it was 14% below last December?s estimate and the most recent 10-year average of 2.57 million and remains 21% below the long-term December average of 2.79 million. The long-term trend in December estimates is depicted in Figure 1, and locations of the 27 transects flown since 1969, 17 in SW LA and 10 in SE LA survey areas, are shown in Figure 2.

With the exception of Catahoula Lake, habitat conditions have improved since the November survey. Acknowledging the negative effects of multiple hurricanes on food availability, water levels have fallen across most of the coast, providing better access to existing food resources for dabbling ducks. Strong north winds during most of the survey created mudflat conditions in some tidal habitats. In the agricultural habitats of SW LA, recent heavy rainfall increased shallow flooding in many fields and pastures, but it didnâ€™t appear extensive enough to last, and otherwise, flooding is limited to managed water, much of it with active crawfish farming activity.

Lastly, in December and January, LDWF conducts a scaup survey on Lakes Maurepas, Pontchartrain, and Borgne. An estimated 8,300 scaup were seen on this survey including 700 on Lake Borgne and 7,600 on Lake Pontchartrain. That is less than 5% of the 179,000 estimated last December and the long-term December average of 187,000. It is the lowest estimate on this survey since 2012 when only 300 scaup were seen following hurricane Isaac passing through the New Orleans area. In years with strong hurricane activity in SE Louisiana, greatly reduced scaup estimates have often been seen, presumably due to disruption of the benthic food resources, specifically smaller size-classes of bivalves as described at: https://esajournals.onlinelibrary.wiley.com/doi/full/10.1002/ecs2.2829. Similar low estimates were seen in 2005 and 2008 after hurricanes Katrina and Gustav respectively.

With multiple cold fronts since the November survey, creating conditions favorable for ducks migrating into our state, we have seen a substantial increase in ducks in 3 survey regions. However, the overall numbers remain below average. The December survey of LDWF coastal WMAs and Refuges reported total ducks were 25% below the 2004-2020 average for those habitats. Surveys earlier in December in Arkansas and Mississippi were well below average, and the most recent bi-weekly survey in Missouri continues to be below average. However, an aerial survey in Illinois reported counts from 43-50% above average, suggesting there are still ducks holding north in the Flyway. For geese, however, there may have been an increase to above-average numbers. In December, geese are only counted in NE LA and on some coastal Refuges. In NE LA, the total goose count was 39% above the December average, and over 1-million snow geese were reported on White Lake WCA.
Reply

Steelsprayer
Looks like one he!! of an upcoming coot shoot for the southeast.
Reply

Delta Duckman
Yes, looks like many of us in SE Louisiana will be shooting divers and pouledeau the rest of the season. If we don't want to do that we could always stay home and take up knitting I guess? For those consistently shooting greys over here you are really lucky, may the duck gods continue to smile on you.
Reply

Thewizard7
Delta Duckman : And thatâ€™s the reason I gave up duck hunting ,No ducks any more , so itâ€™s fishing time year around now ðŸ§™â€â™‚ï¸ðŸŽ£
Reply

mulletsquisher
Deer hunting more, freezers full, but definitely not giving up on Duck Hunting, sometimes ya got to take what nature gives ya! Artic Front Thursday lets see if that moves the birds out of Illinois. Thanks for posting the Dec Survey
Reply

Milton
I know that they say there are ducks in Southeast Louisiana. I have hunted both Delacroix and the Lafitte coastal marsh.In four hunts in the last month, I have shot 1 teal. Today, 12/23/2020 I hunted the marsh south of Lafitte and did not see a duck until we flushed some Dos Gris out of 3 Bayou Bay as we were on our way out. I know if you are seeing ducks in the survey, they have to be concentrated in very limited areas. ' Duckless in the Marsh '
Reply