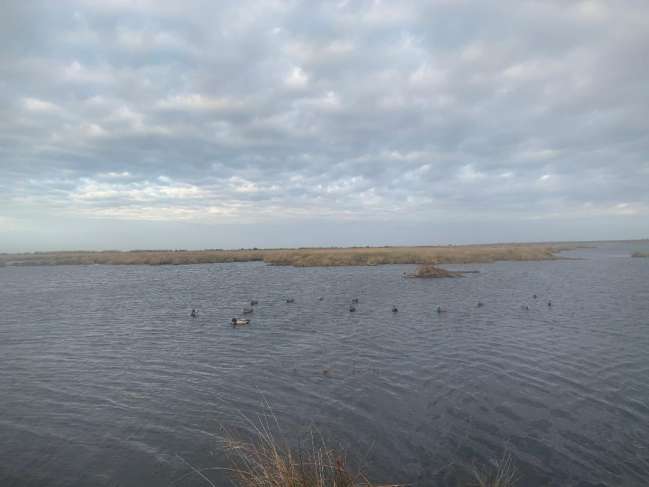 De Nuck and Futz Duo,possibly Sat gonna have addition of AJ to make it a Trio,hit some ole stand-bys today and doggone it,some lil Gremlin musta got hold of my Beretta and son-of-a-gun twisted dat finely-camo'd barrel just enough to where I whiffed!!!SE winds kicked up the water a tad but also allowed us to get to our favorite ponds and I was able to set on flight path dat has played out over past 20 years,trouble was I failed to cash in on first ridiculously easy(had I waited perhaps another second)shot-big ole greenhead dropped outta stratosphere to join plastic parade(think it helped having flocked head drakes in spread)!!!Saw the typical mottled duck puddle jumpers(they follow EXACT path on every hunt so far)and bout the time we were gonna dismantle fine palmetto blinds,doggone PAIR of mallards apparently did NOT spot me but they were on the fringe and I hit the drake but not good enough to drop him and texted AJ telling him we needs him to use perhaps no more than either a pair of hen mallards(do have battleship black duck decoys-killer this time of year)and will scope out Google Maps to ascertain correct placing of his blind in relation to mine and Nuck's.Getting harder and harder to keep at it BUT seeing mallards and watching EXACT pattern play out 100% of de time leads me to believe we can fix dat problem(population control)!!!