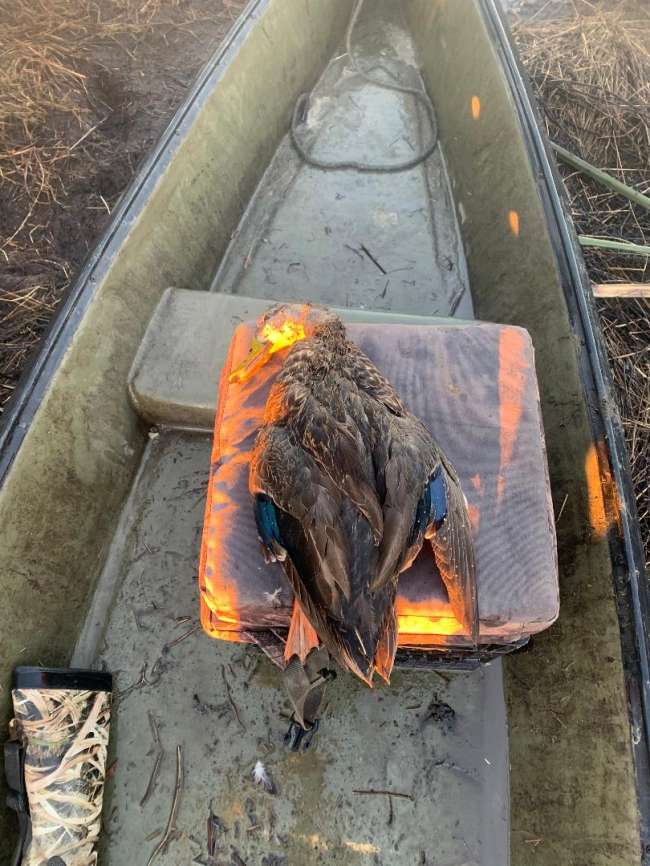 Title should say,RiDuckless Nuck and Futz Hunt as we tried yet again,encountered dreaded low water at launch BUT we now know from our last low-water escapade dat there are a few DEEP channels dat can be traversed and one in particular paid a nice dividend in the form of fine drake mottled duck,think my second drake in two days(tough to tell who shot yesterday's drake mottled duck,think it was me),I was solo today SO know who shot dis trophy!!!Set out exactly six dekes in nice relaxed pattern so essential for fooling mallards/mottled ducks and did have what appeared to be small flock of scaup wing by,refrained from busting em up and saw HUGE flock of tree ducks,whistling up a storm and I tried the widgeon whistle but dey wanted no part of tiny spread BUT spotted pair of mottled ducks,hit em quick and hard with what I call my ATT call,got em to fly right on top of me lined up bigger of the 2,dropped him like a bad habit and was rather comical watching bunch of feathers take a while to land on pond!!Took my time just in case other ducks might want in and went to retrieve trophy and he was a fine specimen!!!Hard to beat taste of mottled ducks and I got the biggest charge outta fellow(not worth mentioning his name)who knocked me for eating mottled ducks,my God,they are about the most delicious ducks out there akin to mallards and have YET to clean either mallard or mottled duck with even a hint of fish in their guts,guess if dey gets desperate and times are tough they might ingest a few fish and those in the know realize teal ingest TONS of invertebrates like snails and they NEVER taste a tad fishy!!!Clean the gizzards of teal and try to tell me dey do not eat snails!!!

Mouse1951
Would enjoy if could understand
Reply

Mandevillian
Mouse 1951,Real easy-last year was yet another ridiculously tough duck season and we were fortunate enough to be lucky at getting mottled ducks(some folks call em summer mallards)into easy shooting range and I was bragging about the quality of mottled ducks and a gent(aint gonna mention his name,not WORTH IT)was blasting me for bragging about the quality of mottled ducks as table fare and this fellow was claiming that mottled ducks eat lotta minnows,possibly so but their MAIN source of food is aquatic grass,they are dabblers NOT divers(divers ingest lotta fish and that imparts fishy taste to meat)and plenty duck hunters refrain from shooting divers like scaup as scaup are notorious for having a fishy taste to their meat.I also refrain from shooting shovelers(spoonbills)as they definitely have a fishy taste.One year a buddy and I shot a fat mallard hen and a fat spoonbill hen and we wrapped both ducks in aluminum foil,barbequed them and opened foil,tasted the mallard hen and it was incredible-then unwrapped foil from spoonbill hen and it smelled like catfish and the meat was for the most part,inedible and even my black Lab,Rex,did not want ANY part of dat spoonbill!!We are having another tough duck season,very few migrating ducks are in the spots we hunt and mottled ducks are for the most part resident ducks and tough to decoy but do respond at times to mallard hen calls coupled with right location(small potholes or small grassy ponds)and very few but large decoys that either resemble mallards/mottled ducks or grey duck hen decoys.Now ya might understand my report a tad better-love the challenge of targeting mallards/mottled ducks and feel blessed to have gotten 4 mottled ducks so far(two pairs)and where we have been hunting basically devoid of greys and teal,heck we used to see plenty of wood ducks this split but have seen virtually no wood ducks,perhaps the black-bellied tree ducks have displaced the wood ducks-they have stolen the wood duck nesting boxes,according to folks in the know!!I for one can tell ya this is tough season for migrating species like greys as I have shot more mottled ducks vs greys(4 vs 2)and if dat trend continues,not a good thing for those of us that typically shoot lotta greys,typically much easier to decoy vs mallards/mottled ducks!!Now ya might get my drift and if not at least I tried!!

P.S. I love the taste of teal and they ingest plenty small invertebrates like snails-clean out enough teal gizzards like I typically do and plenty snail fragments are found in gizzards.I keep hearts,gizzards,livers of ducks.
Reply

frogslayer
Beautiful duck. We only got one of those this year. Hunting for us has definitely picked up the second split. We shot 10 this morning mostly teal and scaup. I forgot to take pictures today but we still had a great hunt. Yesterday on our lease everyone shot limits, but I couldnâ€™t make it.
Reply

Mandevillian
Older son just finished cooking four ducks on the smoker,three mottled ducks and one grey and they turned out FABULOUS!!Probably one of the absolute best ways to cook wild duck and he cooked them to perfection!!He seasoned them and think they cooked for about 45 minutes and finished them off in oven!!Can't wait to dig in!!

frogslayer
I like em in the black pot stuffed with garlic cooked down with onions over rice with white beans. I have eaten smoked before. But I like them things on rice and gravy. Although smoking them is also a great way to eat them as well
Reply

Mandevillian
frogslayer,One of these days,gonna get with Wifey to pen wild game cook book.She learned from her mom and they lived off the land basically nothing got tossed out and Wifey took bunch of fishy scaup,boiled dem babies in salted water three times,tossed out water each time(made house smell terrible)but the gumbo was delicious.The trouble is that by the time she boiled all the fish oils outta dem scaup,the duck meat itself did not have any appreciable taste.Contrast that to when she used all one species like mallards,woodies,greys,teal,mottled ducks,etc and honestly each duck species has a unique flavor.Woodies are possibly the cleanest and widgeons and pintails come in second.The mallard and mottled duck gumbo is probably the meatiest and she never mixes two species of ducks,I am quite the lucky man to have married her.She took a deer roast,stuffed it with garlic and my mom swore it was the absolute best roast she had ever eaten(til we told her it was venison)!!!Glad yall having decent season,ours is pitiful,other than the mottled ducks and few greys we have shot and we do our best to NOT shoot the scaup(though older son just made incredible pork sausage and we could toss some dem scaup in with pork and might not be too bad).Like a buddy would say,'Not his best effort but will make a turd!'

Mandevillian
frogslayer,Yep one of my favorite sayings is 'when life deals ya lemons,squeeze dem lemons and make some lemonade!'Got a die-hard duck hunt buddy that has probably tossed in de towel even before Second Split and this is the fine gent who showed me some fine marsh spots(we had the mutual agreement that we would NOT hunt his spots UNLESS he was with me or I was with him)and his favorite recipes for scaup included de Trinity(bell peppers,onions,celery)and guess ya can toss in plenty garlic.Truth be told,I shot a bufflehead as had NADA to shoot and I breasted the lil beast put him in Himalayan salt brine solution,stuck it in fridge and replenished Himalayan salt brine each of three consecutive days and stir fried the strips and my younger son and I ate the strips,excellent,every bit as good as teal stir fried.Guess ya gotta get creative and I might become extremely creative balance of rotten Second Split.I hope to fool a few more mottled ducks and perhaps the few mallard pot holes I have been hitting past 20 or so years might pan out as they almost always do!!!What helps is that not only do I typically out-work about 100%of my fellow duck hunting brethren,I am CONSTANTLY scoping Google Maps for the small,hard-to-access ponds dat dem ducks seem to find-like I always say,be where the ducks WANNA be vs where you want them to be or where you wanna be!!!Good luck to you as well!!Fishing will be on my radar screen soon,followed by crawfishing and crabbing!!