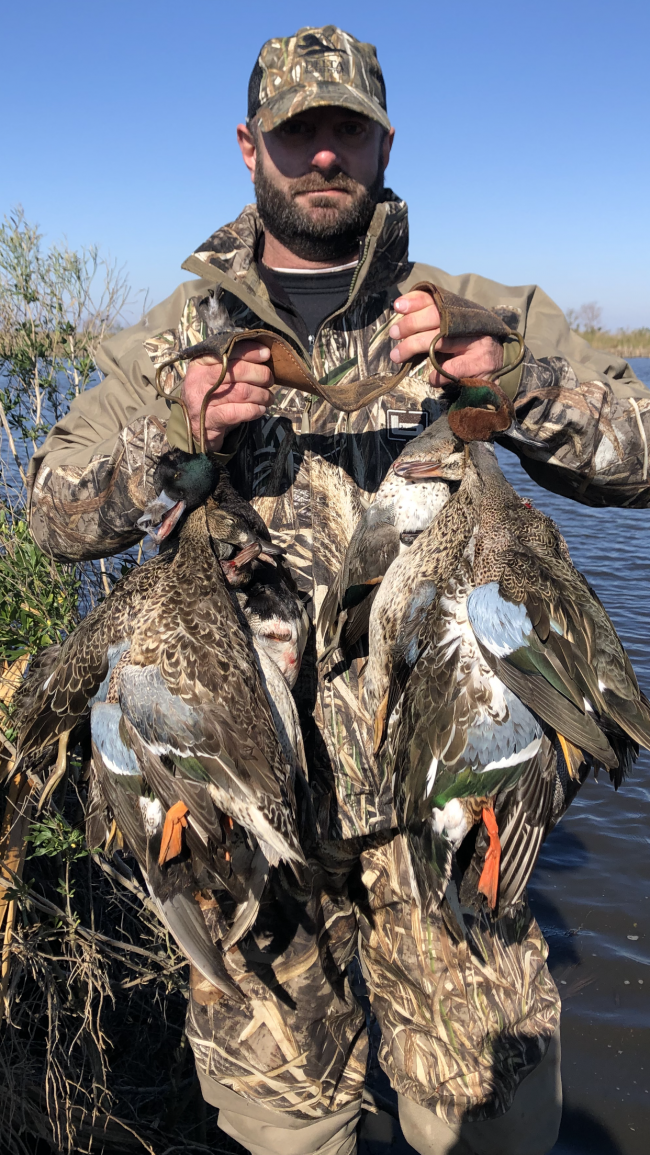 Shot a three man limit yesterday. It took a while but was worth the wait. Mostly teal and and a couple scaup. Didnâ€™t hunt this morning with the rain but the owner of our property hunted my blind and shot a limit as well. Weâ€™re holding lots of ducks all around us right now. Hopefully they stay the rest of the season
Reply

Steelsprayer
You must have all the birds in the southwest. The southeast is void, even the local ducks have vanished. I seen about a dozen total this past weekend and nothing in range.
Reply

Kgt 1067
Well cold weather pushed some big ducks down but it only lasted a couple days .... we did see a big number of mallards on Thursday so we tanked up for the weekend Got all the kids some more shells ready to melt the barrel. On Friday we did that killed several all with mixed bags of mallards, gadwalls, woodies . Saturday morning was supposed to be the day for hunting we had wind , sun , and just all out a beautiful day well no ducks . Talk to several more of our friends same results itâ€™s like they just left over night . Sunday morning same thing seen a bunch of big groups like they were flying south we did get some water going from 25ft to 40ft per ms river natchez stage . I figured Louisiana would be flooded with ducks cause there passing us up not sure where there going . The kids had a blast for the one day we shot them so will take it . A buddy of mine did manage to knock down what we are guessing is a mallard and gadwall mix duck maybe a widgeon not sure I will post the pic pretty awesome looking duck ........ good luck to all for the remainder of season looks like cold weather this week maybe will have some ducks down
Reply 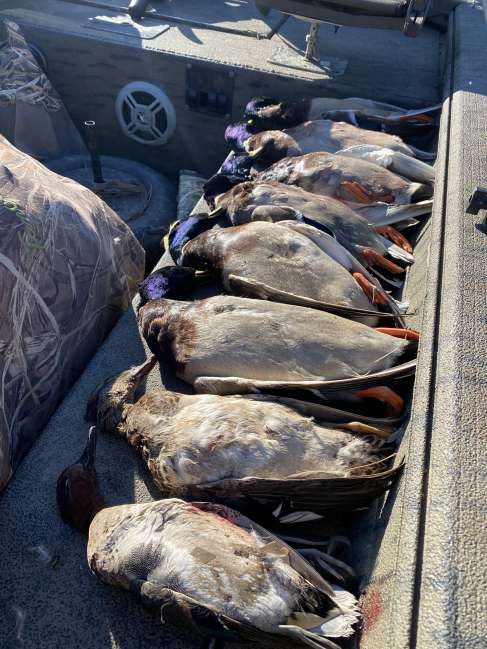 Delta Duckman
Slow times continue where we are. Saturday we shot 2 dosgris and Sunday we shot 1 dosgris.

We tried different areas to see how things would go but results did not change much. What I don't get is Sunday was supposedly a perfect duck hunting day 38 degrees, NE wind about 12 mph with overcast skies and hardly saw any ducks in the area. Water was below normal but not real low. Probably saw 12 ducks in the sky the whole morning, it is nuts.
Reply

Mandevillian
frogslayer,Yep agree dat yall must have all de ducks in your area and yep,steelsprayer,NADA in SE marsh and even woodies seem to have vanished in what was recently a spot loaded up with woodies-rain does NOT seem to alter woodies and think they were waiting til right after legal shooting time to start flying-did have two pairs look like they wanted in and while stalking tree rats had flock of 8 right above tree tops,kinda fringe of effective range,fired solo shot and watched em disperse and climb even HIGHER!!!Gonna hit more ole stand-bys before season end and probably need to hit deer stand a few times,good news is dat Area 9 archery ends Feb 15th!!

BlueShamu
Looks to be a mallard drake in eclipse plumage.
Reply

Mandevillian
Blue Shamu,Many years ago I was extremely fortunate enough to get invited to NDakota in the early season and think ya might be right about the eclipse drake mallard.We shot many drakes that resembled that one and we had to be vigilant as the hens and drakes(in early season up there)were hard to tell apart,unless they had fully-plumed heads,of course.My guess is same as yours,simply a drake that is molting!!

bayoubob
The duck in question is an old hen mallard that has stopped producing female hormones, which causes them to display some male plumage. The key is the bill...hens that go through this will ALWAYS keep the orange/black bill. If it was a drake, the bill would be the typical yellow/green color.
Reply

frogslayer
I agree with bayou bob on this one definitely a mallard hen with some colors of a drake mixed in. The beak gives it away. On another note we had a drake cinnamon teal killed right next to our blind Friday afternoon. That's the second one killed in our area in the last 4 years. They come in with flocks of blue wing teal. We or probably holding about 3 to 5 thousand blue wing right next to the property we hunt. This happens every year the last three weeks of the season.
Reply

Mandevillian
Only problem is white ring around neck plus dark red breast-got a buddy who has Poultry Science Degree from Michigan State(duck expert)might ask his opinion-would agree except that most of what that duck exhibits is male pattern.Does not make sense to be eclipse since that would be early season pattern like what we had about 4-6 years ago hunting NDakota.There is something called hermaphrotism (not sure I spelled dat correctly)where an animal has BOTH male and female characteristics-dat may be exactly what this duck is BOTH male and female characteristics!!!Hopefully a taxidermist might chime in and I know when I shot a true black duck about 4-5 years ago,Kevin Hynes basically confirmed that the drake black duck I shot was 100% pure black duck NOT mottled/black hybrid and I doubt this is hybrid but may have both male/female characteristics!!!

Mandevillian
Just because I wanted to be gramatically correct,looked up and hermaphroditism is the syndrome I was referring to and be willing to bet that the duck in question is what is called'hermaphrodite' and like my previous post,that is where an animal or human exhibits both male and female characteristics.Probably about as rare as hen's teeth but hope I see a buddy of mine this evening and will see if he can perhaps chime in.Would be a rarity but why not see what the avian experts would say!!

the dredger
its been a little slower than normal for us this year .. Not the best but not the worst either .. weve hunted every weekend and usually 1 sometime 2 weekdays . looked at the duck tally this past weekend and we right at 300 ducks for year so far. with 75 percent being greys . weve had some really great hunts and also some not so good hunts .this weekend we only killed 3 greys. but what keeps us going is just as fast as they disappear they show back up where we at . our better hunts have been on south east /west wind .. side note me and a buddy each got a pretty male pintail weekend before last that going on the wall !!!
Reply

cliret
Very nice on the pintail. Yeah we haven't fired a shot in two hunts. I agree definitely, more birds on non north wind directions also more water. We had no water at all last weekend. Not good. Think we are taking the weekend off this weekend and gonna roll again final weekend...
Reply 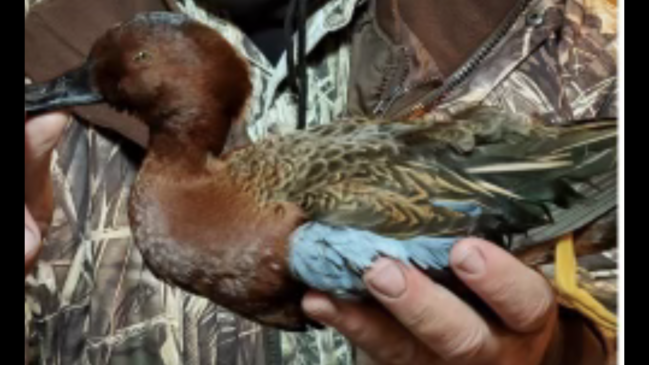 Been shooting more ducks the last few weeks with south east winds. Most of the ducks been coming off the gulf when the winds pick up. A buddy of mine went fishing off shore last week and they jumped about 2 to 3 thousand ducks 15 miles off shore. They were rafting up way out on a calm day. When the winds pick up they head inwards witch helps us a bunch.. they just sit out there with no pressure and head in when the winds pick up. Hopefully they stay around the next two weekends to finish up the season. I have the picture of the cinnamon teal shot next to us last weekend.
Reply

Mandevillian
Got an Abita KC buddy who has hunted Venice recently and he said there were thousands of ducks rafting up out in Gulf.On another note,should be seeing another KC buddy who is an absolute duck expert will mention drake mallard to him and see what he thinks.About 3 seasons ago,I shot a ringed teal hen,native of S America and the only plausible explanation was an escape of small flock from Slidell aviary where one flock may have made it to the Big Branch Marsh.On two separate hunts,I spotted teal that I could not definitively identify and shot one that had pink feet,never seen a teal with pink feet and we put pic on Sportsman,in fact Bayoubob was the one who ID'd duck.I had flock of six sitting in my dekes and ran em off not knowing exactly what they were and next hunt dropped single hen!!