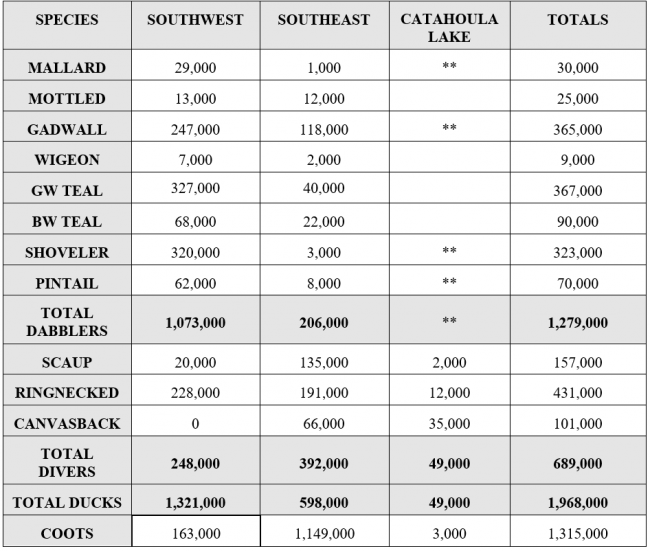 The 1.97 million ducks estimated on this survey is 11% less than the 2.21 million in December, 15% less than the 2.3 million last January, and 33% below the long-term January average of 2.95-million. In the last 7 years, the January estimate has been the same or lower than the December estimate, and this is

the 4th time in that period it has been at least 10% lower. The long-term trend in December and January estimates is depicted in Figure 1, and locations of the 27 transects flown since 1969, 17 in SW LA and 10 in SE LA survey areas, are shown in Figure 2.

The estimate for the SW survey region increased from December (1,195,000 to 1,321,000) because of large increases in estimated green-winged teal (188,000 to 327,000), shovelers (163,000 to 320,000), and ring-necked ducks (56,000 to 228,000). Estimates for other species except wigeon declined in that survey region. The largest concentrations of ducks seen in the SW LA were shovelers and ringnecks on a sewage lagoon near Rayne, and black-bellied whistling ducks (not included in the traditional estimates) in the fresh marsh near Cherry Ridge.

Lower estimates from December in both SE LA (943,000 to 598,000) and Catahoula Lake (76,000 to 49,000) were largely due to big declines in the number of ring-necked ducks in those survey regions. Ring-necked ducks declined from 556,000 to 191,000 in SE LA and from 41,000 to 12,000 at Catahoula Lake between the December and January surveys. Estimates for all dabbling ducks except wigeon declined from December in SE LA, while estimates for scaup and canvasback increased. The largest concentrations of ducks seen in SE LA were ring-necked ducks in the Upper Terrebonne marshes southeast of Amelia, (although much fewer than in December), and a huge raft of scaup off-transect in the Mississippi River down from the grain elevators north of Myrtle Grove, and thus not included in the estimates. Scaup and canvasback counts at Catahoula Lake were essentially the same as in December.

Over the entire survey region, only shovelers, ring-necked ducks, and canvasbacks were above long-term January averages. Species-specific comparisons of estimates from this survey with 30-year and 10-year averages are depicted in Figure 3. Notably, the estimate for gadwalls was less than half the most recent 10-year and 30-year averages.

Water levels in coastal Louisiana and at Catahoula Lake were lower than in December. At the time of this survey, water level at Catahoula Lake had dropped about 2 feet from December and was at management target depth. Although providing improved foraging habitat, very few dabbling ducks were seen on the lake. Similar to December, water levels in coastal marsh ranged from optimal for foraging ducks in managed marsh to broad mudflats in tidal areas. Shallow flooding from rainfall prior to the December survey had mostly disappeared from non-managed fields and pastures of SW LA and shallow flooding was mostly limited to managed water, much of it with active crawfishing activity. Again acknowledging negative impacts from multiple hurricanes on both submerged aquatic and seed-producing annual vegetation across the coastal zone, habitat quality is well below average.
Reply

Mandevillian
Delta,Thanks for being de bearer of de bad news!!!Sure wish I knew where the gadwall in SE area are hanging out-definitely no where near where I have been hunting and kinda funny dat spoonies and ringnecks hanging out in sewage lagoon!!!See lotta fine mallards on W Esplanade canal pretty much everytime I go to Kenner to do some repair work on my mom's Kenner rental house!!Good luck to all who chose to pursue waterfowl given what the aerial surveys show!!!Might just be blessing in disguise that I ran into issues with steering cable and helm in SouthFork(getting ready to install cable as I type this)!!!Got a few hunts left in ole body and hope to find a few willing participants,though kinda bleak prospects!!!Went to check out water levels at launch and as expected,water levels very low.kinda double whammy-fronts bring ZERO ducks,only serve to lower already-low water levels!!!

jameswills33
Some simple websites give the best surveys to take and win gift cards, coupons, rewards, and cash prizes for free. surveysaga is the one among that list. They have gathered some official customer satisfaction surveys to take and win $10 to $5000 worth of gift cards, coupons, different types of food items, and rewards for free. Visit the Surveysaga com website for more information regarding genuine surveys.
Reply

ViolaJobs
Only shovels, collared ducks, and canvas shoes were higher than January's long-term standards in the entire study area. Slope 2 is not a bad choice for those who want to play entertaining games
Reply

ViolaJobs
Only shovels, collared ducks, and canvas shoes were higher than January's long-term standards in the entire study area. Slope 2 is not a bad choice for those who want to play entertaining games
Reply