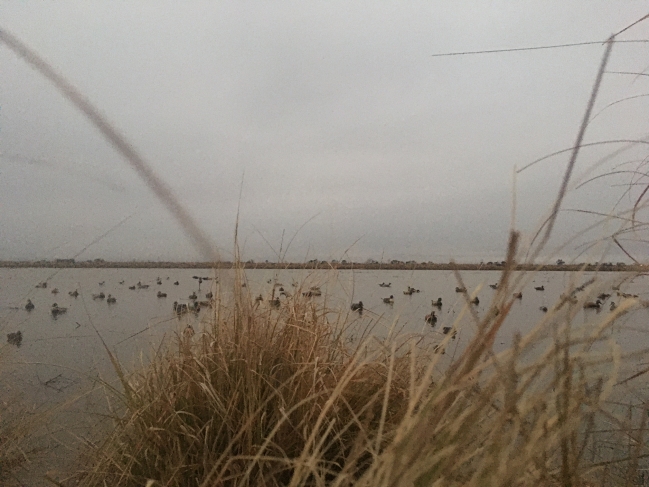 I had the pleasure of hunting with Glardon Hoffpauir at Spoonbill Adventures in Welsh, LA on Wednesday. It was great to go over there and try something different after the very disappointing season we are having in Southeast Louisiana. We hunted a beautiful flooded rice field hoping for ducks and speckled belly geese. Glardon does a great job with the decoy layout of ducks in front and geese in the back of the pit blind which disappeared into the levee. The set-up was perfect. The wind was easterly and we had broken up clouds. We saw geese and pintails early, but they were high and not interested. But Glardon would not give up and we were able to take a few ducks and watch his dog Nellie expertly track down and retrieve them. I had a great time talking with Glardon about duck hunting and this year's season. He told me that the season started great, shooting over 3,000 teal during teal season. They also had success during regular duck season but it was off from the usual amount of ducks and geese. According to Glardon, 'We really had to work hard and move around and try different things to put our guests on birds this year. Everybody left happy and that is how I judge success.' In a year when most Louisiana duck hunters are disappointed, Glardon has provided his hunters with some hope for the future and he said, 'I haven't lost hope, even though this was a tough season.' I highly recommend Spoonbill Adventures (337-368-5969). They are already booking teal and duck hunts for next season.
Reply

Mandevillian
Capt.Steve,Can't get past de name of dat outfitter,'Spoonbill Adventures' no joking but a spoonie aint my kinda duck and we jokingly call em Hollywoods!!!Glad ya had a great time and hope de Spoonbill Adventures Outfitters does a phenomenal job,other than de funky name!!!Been a ridiculously tough duck season in de local marshes and hard to believe duck season 20/21 bout a wrap!!!Hope crawfish season turns out to be a banner one and guess we got Wild Turkey Season to look forward to!!!I used one of ya guides,Ricky Hunt,many,many years ago and we had a great time,though mostly what we shot were scaup,another species NOT in my favorites!!!