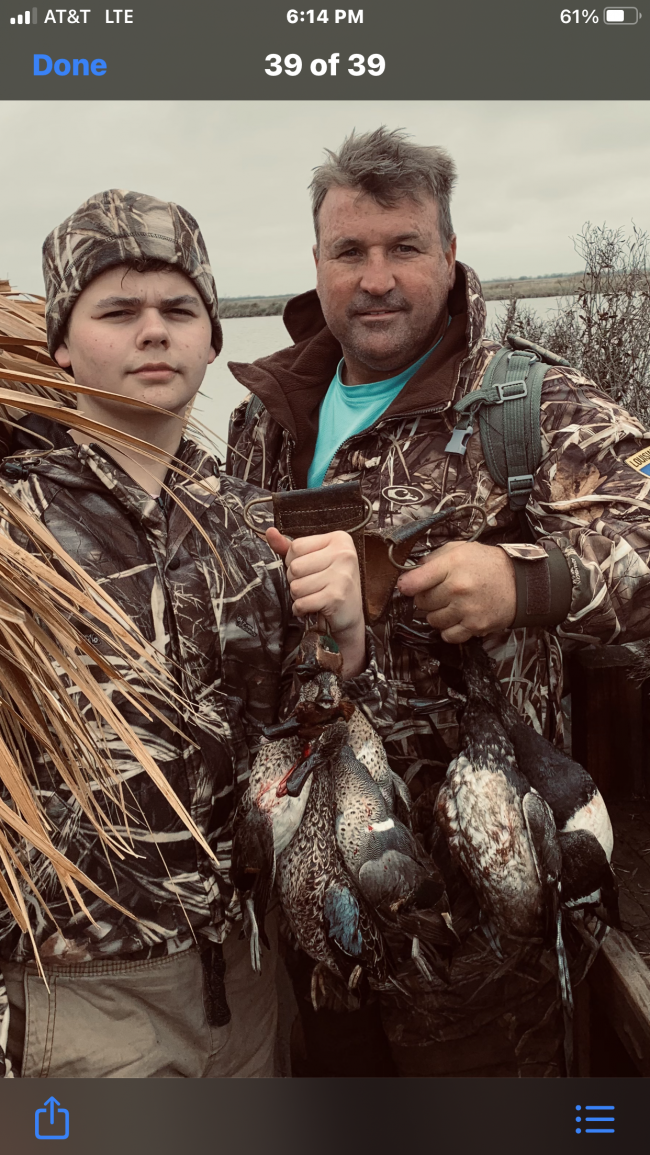 Finished up a great duck season down in Pecan Island. We shot 8 on Saturday and 10 this morning. Donâ€™t know what happened today but the scaup showed up in bunches. First time this year we had that happen. Not complaining but thatâ€™s all we had to shoot at . Finished with a limit of scaup one teal and one spoonbill.
Reply

Delta Duckman
Two of us went out this morning in foggy conditions and shot 4 tree ducks, 4 dosgris and 1 ruddy duck.

Hopefully next year we have some vegetation in the ponds to help keep puddle ducks who make their way down here, here. However, as we all know the game has changed and with all the food and water up the line no reason for puddle ducks to come to SE Louisiana. Where we hunt it has become diver duck country with some exceptions but not like it used to be. Despite undesirable outcomes over the last few years we hunt on.
Reply

frogslayer
I agree on the duck migration. As long as they flooding those corn fields north of us weâ€™ll never have the ducks we used to have. Thanks to Ducks Unlimited for providing all the free feed and resting areas for them to stay. Sad to say but itâ€™s one hundred percent true. I know plenty of people that went to Kansas and Oklahoma and they smashed the ducks in flooded corn fields. All public land . You can drive up there rent a hotel or house and kill all the ducks you want. Just walk in and hunt. My buddy and them shot over 100 in 4 days all Malards and pintail on public land.
Reply

Delta Duckman
I have gotten similar reports from people I know personally who have done the same thing you describe. Who would have thought states that once had tumbleweed crossing the roads on windy days would become duck capitals of the country.
Reply

duckbuster2013
its all about the big money now. I do understand the post being on public land but duck hunting is mostly driven by big guide operations, big money, and the best accommodations your money will pay for these places to own. Friend of mine went to kansas had 2 groups of ten. The 2 groups hunted ten men in 2 different areas. All limited out in alittle over a hour. Total price was $6,000.00 for the hunt. Multiply that for two days $12,000.00 weekend sounds pretty good. Those states not that long ago didnt know what a duck looked like when it flew in front their face. Then after a few hunts in their flooded corn fields and smashing some ducks. Hey wait a minute we can make some big money here. And we gonna do whatever the law allows and then some to keep them up here. Guess what guys its only gonna get worse for us in the south. Every year that goes by the old ducks teach the new ducks what to do or not to. The writing is on the wall for our state which use to be the #1 duck kill state around. But we are die hards. We will continue to do what we have done for 20, 30 years or more. Remembering the good ol days and complain to our kids and grand kids about how it use to be.
Reply

Mandevillian
Guess I mighta got banned from this site as I tried at least 5-7 times to post my duck-less NShore hunt from yesterday!!Gotta hand it to folks that have had decent success this year,happy for them.Where we hunt,got grass to TOP of most ponds,all the groceries a duck would EVER need!!!Katrina year,older son and I nabbed over 140 ducks on maybe 18 hunts,fast-forward to this year,might have a 2-3 man limit(combining all our hunts)and get this-Bayoubob yet to nab a Second Split duck and I have shot twice as many mottled ducks as I have migrating ducks,grey,2!!duckbuster2013,right on de MONEY(pun intended)!!!Get more than used to it,tree ducks already have displaced our wood ducks,head down Bayou Lacombe and see colonies of tree ducks,at least they are great table fare.Might have to target them vs our bread n butter greys and EVRYONE knows about migratory manipulations,do NOT for ONE second subscribe to BS notion about habitat degradation !!

duckbuster2013
Its simple. What used to be called the Mississippi flyway can now be called the kansas, oklahoma, nebraska flyway. Anyone that has any experience in waterfowling in our state sees the difference in the ducks. And when i say experience i mean true hardcore duck hunters with the passion we have. Not the new generation hunters. You know the mud boat marathon hunters. And what i mean by that is the guys carrying the first place prize for running around in the mudboat for 3 hours straight watching all the ducks fly out of every pocket, pond, or bay with the macaroni carburetor and ported exhaust to make the boat run 3 miles an hour faster. Im sure weve all encountered those guys if you on public land and most private land owners. Good luck with the fishing Mande. Time to grab the rods
Reply

Mandevillian
duckbuster2013,Right on regarding the wonderful situation we have been experiencing at least since Katrina-era duck seasons,plain and simple.There may be a few exceptions,but for the most part,sub-par seasons for the vast majority.Lucky me as I hunt about exclusively the Public/Federal options on NShore and have seen a few Surface Drives where we hunt,always politely advise folks using them that they are BANNED in Federal Refuges,plain and simple no bs about using electric trolling motors on them the SUPPPOSEDLY skirt the law.Gimme a break,the mud boat jockeys you are referring to most definitely are the newer generation who did NOT grow up de ole-school way and I do have a Medicare Client who does it the right way,has a surface drive and even he complains about the shear volume of 'mudboat jockeys' constantly running those loud motors constantly,chasing up ducks and making it very difficult for the rest of the diehard hunters.He took another one of my Medicare Clients not that long ago,they were all set up and they heard a mudboat probably closer than 100 yards away,this fellow insisted on setting up WAY too close to them,ruining their chances at half-way decent hunt!!!Where Bayoubob and I typically have been hunting,we do have some competition but for the most part,these have been hunters considerate of others.There was one instance,guess guys witnessing me down fine mottled duck that I most definitely called in,decided they needed to either head elsewhere or head home and I have no idea which it was just know dat right after I downed fine mottled duck they picked up and were gone!!!Get used to MT skies and gear up for fishing,crawfishing,turkey season,etc as duck migrations seem to have been permanently altered/shifted/done completely away with!!!Sad,sad,sad guess my soon-to-be 4 year old grandson might be fortunate to get chance to maybe hunt teal in about 6 years,IF we still have teal migrating!!!Too bad there appears to be little-to-no correlation between teal season hunting success and regular duck season success(other than possibly first few days of regular duck season,IF they teal stick around long enough)!!!