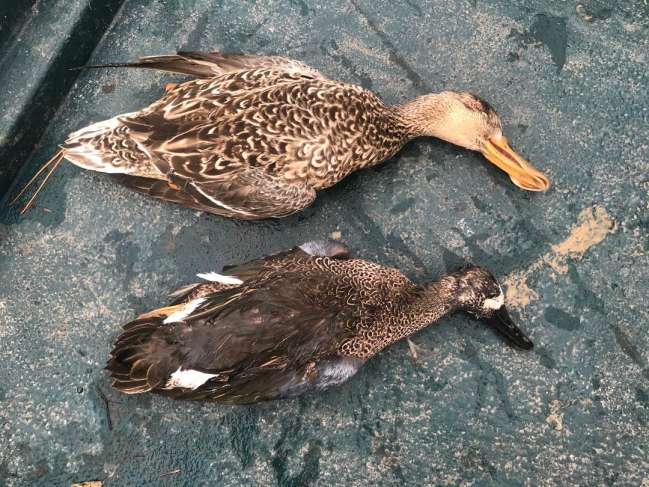 With a ridiculously-slow season winding down,know de tendency would be to toss in de white pelican towel as far as 20/21 duck season goes,and we darn-near did just dat BUT decided to hit an area that is a chore to access with even decent water levels and by now we can tell what kinda difficulty we gonna encounter just via launch water levels!!Levels were to the point where we knew it gonna be a chore but ducks seem to love one set of ponds SO we made de executive decision to tough it out,slog through mucky sand to get set up and we hunted side-by-side,something we rarely do but it woulda been extremely difficult for us to set up blinds far enough apart.Heard typical chattering of mallards/mottled ducks with an occasional teal and few drake greys so we had decent expectations(this season we have had ZERO expectations)and legal shooting came and went,had little rain then drake blue wing came in and nabbed him,followed by spoonie hen dat Bayoubob dispatched,I had the enviable task of retrieving our quarry and it was indeed a chore and guess by now we getting adept at using one leg to basically swim the pirogue across mucky sand kinda hard to walk in but adapting like we do made de task a tad easier.Did have a pair of fine greys land but well outta range and had a few teal buzz us and had nice flock of what appeared to be three trophy mottled ducks come oh so close but guess dey did not get their PHD in duckology by getting shot!!!At least Bayoubob cracked de seal on Second Split ducks and all I added was fine drake blue wing teal.Typical for us in that we saw a few big ducks JUST as we were packing it in!!!Got 3 more hunts in me,might shorten dat to two hunts so I can hit deer stand.Deer club Pres sent pic of fine,thick 8 pt killed today at 8:00 am on my deer club!!!I am always wrong place/wrong time!!!