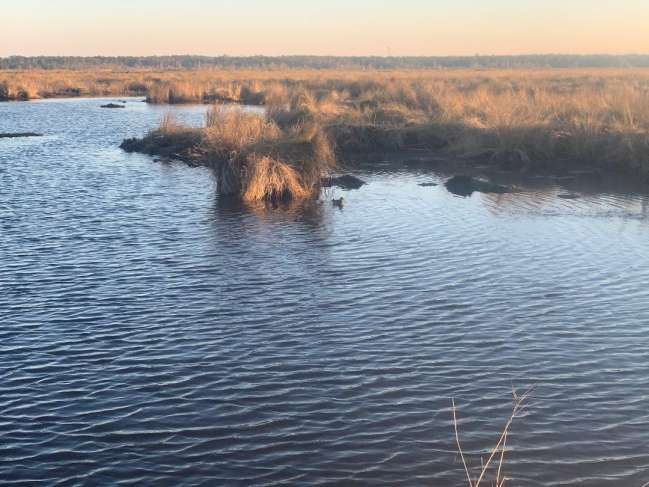 Bayoubob and I have at least been giving the NShore ducks plenty of hunts to try,in vain,to rid ourselves of horrible taste this miserable season has unfortunately left for not just us but all too many diehard waterfowl hunters!!!We have tried plenty of ponds,just about every single pond has aquatic grasses,some lot more than others and the consistent theme seems to be lack of ANY migration,at least as far as we can discern!!!Hit yet another area that just few seasons ago I was able to quite readily take a 6-duck limit and on that particular hunt,had a buddy text me wanting to know if by chance I still had my dekes employed and gave him de bad news-my dekes were picked up and put into Chapman,just so happened to be on proverbial,'X' dat day!!!Because of how rotten this season is,we lower our expectations,so low to the point where IF we even see a duck we are rewarded,heaven forbid a duck get into range!!!We each had very marginal chances at trophy mottled ducks and ya would suspect it-right after dismantling palmetto blind and casing up shotgun,fine pair of mallards decided they liked the pond just tad W of me,about 150 yards out!!!Already had hearing protection removed,Beretta cased,blind material tied up,dekes on carabiner,etc!!!Did take pic of fine lil gallinule,their season ended a few weeks ago,I believe, and I have been told they are excellent table fare.This lil specimen had NO idea how close I was blinded up and the frustration is to the point where I may have made my last EZone 20/21 hunt,though wanna get older son a last chance and also give Bayoubob one more chance-he is opting out for Sun and I really need some deer stand time!!!Hope Sat is best hunt of this rotten season and once the colony of white Pelicans start flying,seems like duck flights over!!Oh well,at least we got T-Funky slabs to look forward to and have met Cajun Ray a time or two on T-Funky and not that long ago,ran into Tony Taylor and think other gent was Tim,they had Live Scope functioning and dat made it super-easy for em to find dem elusive slabs!!!Love this time of year!!!

Jneupertcss
Have the divers moved back into the lake? They were there the first split and first week or 2 of the second but moved out.
Reply

Mandevillian
Jneupertcss,The divers seem to have gone de same way as the woodies,aint dere no mo'!!!Not big fan of scaup but Wifey does make a great gumbo with them and fishy-tasting shovelers,we jokingly call em Hollywoods with dat big ole grin!!!Face only a mom could love(LOL)!!!We saw exactly one pair of buffleheads today!!!Good luck if ya go this week end!!

Thanks for the update, yeah there fun to shoot and was pretty much the only thing I hunted earlier this year. With the way the last few season has been Iâ€™m trying to adapt to different styles of hunting before I totally give up on the ducks and surprisingly it was actually kinda nice to go out and shoot a good bit of birds even if it was just buffleheads and scaup.
Reply

nutsabtfishing
I hope you do have a luck with the deer I decided to stay away from big branch this year and get my deer and trapping in. I was able to connect on two deer this year and found some wood ducks I might try to sneak up on next few days if they stay there. Maybe next year will be better for duck hunting for you but we say that every year. Big Branch has never been the same sense they pumped in all that lake p mud years ago after Katrina and changed the look of the whole area. I miss it that place like it used to be back in the 80s and 90s ..
Reply

Mandevillian
nutsabtfishing,Wifey has a birthday coming us,this coming Tuesday(Groundhog Day)and think she and I might make us a little trip to beloved ole T-Funky seeking some delectable slabs,jigging em up and got a few about 'can't miss' spots up de ole sleeve!!Scaup do indeed make a decent gumbo and I took a bufflehead,doctored up dat lil beast and stir-fried it cutting it into small strips and our younger son and I chowed on it and it was incredibly good!I stuck the cleaned breasts in ice bath in fridge and tossed in some pink Himalayan salt,tossing the water and replenishing the Himalayan salt brine for about 2-3 days and that removed lotta blood and possibly fishy taste from lil beast.Guess scaup might benefit from same treatment.Wifey took bunch of scaup,boiled em down in salt water,tossing water three times and replenishing salt each time and she made great gumbo with scaup,trouble was the meat,though no longer 'fishy' was somewhat bland.When she uses woodies,mallards,greys,teal she does not have to salt the water and each duck has its own flavor,if ya do it right.Mottled ducks and mallards are perhaps the meatiest and best-tasting and makes sense as they are dabblers vs divers.When ya get dealt lemons,like most of the past handful of duck seasons,why not make lemon daquiris outta dem stinky lemons!!!

Mandevillian,gearing up for other game seasons!!

P.S. Yep,ole Big Branch has radically been altered since the glory days around Katrina year!!!Guess if ole Biden has his way,gonna have to target ducks with slingshots!!!
Reply

MooseKnuckleFuckle
Fuck, ducks all over around Broussard since the split opened
Reply

nutsabtfishing
Mandevillian well I had a productive morning I caught one coyote in the traps and went right down the road and ambushed a couple of fine male wood ducks. I saw them in the creek yesterday so took a chance they would be there this morning and they did not disappoint me I had one more but she got away on me but those two will make a fine meal. Good luck fishing as well:) Do not get me started on slow joe and the ho I am trying to have a good day lol :)
Reply

Mandevillian
nutsabtfishing,We as Second Amendment Proponents NEED to do EVERYTHING in our power to remove the Left from office PERMANENTLY and can't tell ya how many Tea Party,etc e-mails I get and latest fiasco is video of Sleepy Joe and Ya Know Who avoiding questions after reporters asked the Bumbling Idiot what types of sacrifices he was asking Americans to endure-NOW just imagine the treatment The Donald woulda gotten had HE done dat!!!I will do EVERYTHING in my power to make sure Bumbling Idiot gets removed,PRONTO!!Thankfully ya got two woodies-got maybe two more duck hunts left and maybe one more deer hunt left in ole body and looking forward to fishing,crawfishing,etc!!!

nutsabtfishing
Mandevillian I have one saying for those two in office, joe and the ho has to go.... They are already starting on the 2nd amendment as well the crazy congress woman from Texas summited HR bill 127 and there is crazy shit in that one. People say it will never pass but we said that same thing about sleepy joe and he got elected so be vigilant on what is going on in this county but I know you are for sure.:) Good hunting this weekend as well
Reply

Mandevillian
nutsabtfishing,Let's get together soon to possibly exchange fishing lies(LOL)and guess ole Joe got right last name,Biding his Time,and here is what I will say about this fellow-have read reliable reports,get this,his Cognitive Ability is 50% of whatever it mighta been,not gonna speculate.His name comjures up these letters B=Bumbling,I= Idiot,D=Dementia-Ridden,E=unEnlightened,N=Numbskull!!!Now we know what BIDEN means to de Mandevillian and guess what-there were some hilarious You-Tubes showing poor Joe's top dentures falling out during a debate and he was basically screaming dat he is 'THE Only One who can stand up to the NRA'.Try to find em,dey been removed from You Tube BUT I was able to watch one and it was MORE than hilarious watching ole Joe try his best to keep dem teeths in his HEAD!!!

Mandevillian-Free Speech should allow me to bash this Moron
Reply

nutsabtfishing
Mandevillian yes you are right about free speech and yes we should get together and tell some good fishing stories and through in there some biden bashing lol or if you have time you can tag along on a fishing trip sometime hope you seen some ducks this last weekend:)
Reply

Mandevillian
nutsabtfishing,Wish I could lie about seeing massive quantities of ducks but dat would be anything but accurate!!Did see nice bands of greenwing teal dat had ZERO intention of dive-bombing into my spread!!!Heard tremendous volleys of shooting basically due S of where I was blinded up,perhaps these lucky hunters were on flocks of teal!!!Gonna hit Honey Island Swamp for solo woodie hunt,might sneak in Big Branch paddle-in hunt afterwards,now dat is very ambitious and I did one of those last season!!Taking Wifey this Tuesday,weather permitting,to T-Funky,hope we nab some fat and sassy slabs!!!Love my T-Funky slabs and once Lady P water warms a tad,who knows,dem fat and sassy specks might oblige!!

Mandevillian
Giving the wood ducks a last ditch effort and if I have the energy might just hit Pipeline as today last day kinda doubt many folks as passionate as me(probably infinitely smarterðŸ˜¬)and ya gotta go to know. Maybe today will leave decent taste in my mouth and love de delectable nature of wood ducks. ðŸŽ©