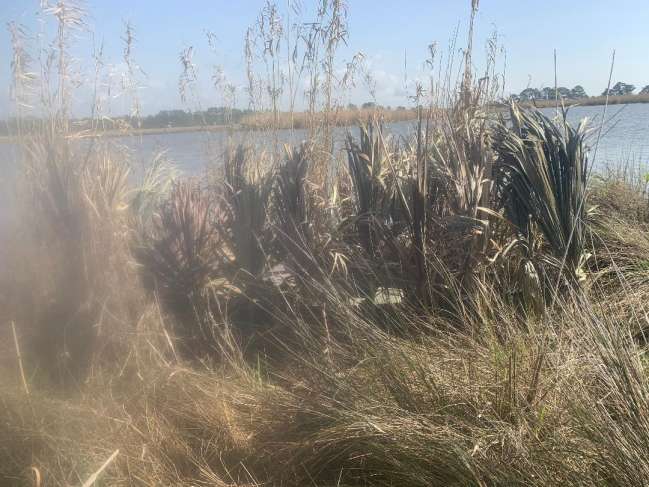 Well,well,saddest of the sad duck seasons,at least for me and the hunters that hunt with me,mercifully ended with a thud!!!Worked my tail off to try to make the most of NON-existent duck migration and today was a perfect example.Started solo hunt with nice trip to Honey Island Swamp(used to have plenty woodies,perhaps storms blew out bunch of woodies-think a little scouting for sloughs might be what I need to do)and guess little bit of rain about the time woodies typically screech though cypress trees may have had negative impact but I did spot fine pair of woodies,trouble was that they were NO where near in range.Stuck it out til 7:20 and decided to hit area that used to hold PLENTY big and little ducks plus decent amount of mottled ducks.Made ole-school paddle-in hunt and did notice significant lack of SAV in this particular area compared to the typical areas and ponds we have been hunting.Water was perfect for accessing the area I ended up hunting and did hear decent amount of shooting good bit W of where I was blinded up.Bayoubob jokingly calls this particular area 'corn pond' as greys and teal and mallards USED to flock to this particular area as if it had TONS of corn dropped in it and there is absolutely ZERO corn in these ponds,just incredible aquatic grasses.What I did see today,first time this season hunting this area,was that there was plenty of grass on my way to this pond but very little in the pond I hunted and will attach pic of incredible natural blind I enhanced with about 20 palmetto fronds!!It is quite possible that ducks like gallinules destroyed the grass as other ponds I have hunted had plenty grass at beginning of this horrendous season and last few hunts I noticed significant decline in grasses.Dem gallinules do indeed eat lotta grass-watched one not too many hunts ago and this lil fella consumed plenty!!!Sad season ended,at least for me,around noon and as per the norm,AFTER casing gun,putting dekes back in pirogue and dismantling blind,spotted nice flock of what looked like greys!!!Part of the situation was that there was NO ONE anywhere near me and guess where these greys were-where there was not a hunter in sight,other than me,paddling back to launch!!!Bayoubob confirmed dat this was his WORST season ever,even weaker than last year's tremendously weak season and I used to keep a detailed log,quit doing dat about 3-4 seasons back but do know that I killed a whopping two greys vs 4 mottled ducks,dat should indicate SERIOUS lack of migration!!!Kinda hard to target mottled ducks,though I was successful to a degree and did lose two fine mottled ducks,coulda had 6!!!He and I may resort to outta state duck hunts for Second Split and what started out fairly strong ended with a serious THUD.Hard to believe that Sportsman's Paradise is now a state like Kansas or Oklahoma,not even Arkansas!!!I could go on and on but trying to watch Life,Liberty and Levin!!!Dat Biden Adminstration seems like Dictatorship and we as Second Amendment Proponents need to keep Biden under control before we have issues hunting and pursuing our passion!!!Maybe ole Biden will outlaw lead jigheads for fishing!!!

nutsabtfishing
Mandevillian I am sorry for your bad season there maybe it will be better next year but I am not holding my breath lol and as for as sleepy joe is concerned hold on to your guns because they are coming for them. I tell people do not under estimate what is going on we did not think biden would be in there so do not underestimate what they can do to the 2nd amendment...
Reply 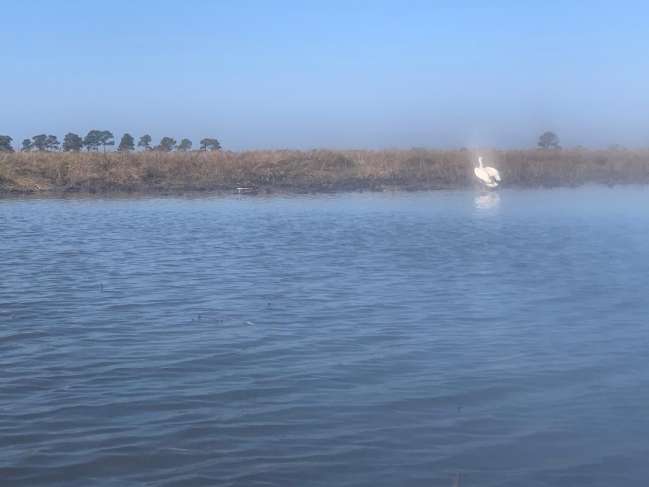 Yep,Glad(hard to utter those words)that this horrendous duck season has concluded.Attaching neat pic of huge white Pelican dat shoulda been the bad omen to let me know ducks were NOT gonna cooperate and Bayoubob and I joke all the time about the white death Pelicans(always seems dat once they start flying,ducks not gonna be flying and seems to be direct relationship)!!!Gonna gear up for fishing and wouldn't ya know it,got potential freeze tomorrow,Wifey's birthday(GroundHog Day)and was hoping to get on some T-Funky slabs,though doubtful they gonna be active unless water temp not too doggone cold.Enjoy pic of huge Pelican,not sure why he did not get up and fly as I was no more than 30 yards from him as I paddled by yesterday!!!As typical,did see flocks of greys start getting up AFTER gun cased,dekes in pirogue,blind dismantled(left palmetto fronds in marsh-nice to rid pirogue of little weight)!!

Mandevillian
Got recent e-mail purporting to portray ole Sleepy,Creepy Joe utter that he had NO idea what he was signing AS he is signing tons of Executive Orders.The real scary part is I have NO doubt he uttered those words,perhaps the evil Democrats now have the evidence needed to invoke the 25th Amendment and here is the even-scarier part-Harris(Socialist Big-Time)would NOW be in command.Guess ole Joe's house of cards bout to come tumbling down!!If folks watch Hannity and Company,they will get the truth about this troubling Administration.Ole Hannity blistering Sleepy,Creepy Joe every chance he gets and it is sickening to hear what is going on in this crooked Administration!!!Enough is enough!!Like ya said,hang onto ya guns with both hands and both feet!!

nutsabtfishing
I would look at the cartoon but I do not get the paper myself and I have not watched the news sense election day with all the lies they tell. Heck I have not watched local news from new orleans in over 3 years and do not miss the lawyer commercials lol yes it is going to be cold the next two nights up here and looking like it may be down to 28 sunday night if the forecast stays the same. My darn mayhaw trees are starting to get blooms on them as well. if you get out and go fishing there I hope you get some...

Thewizard7
Mande : Winds been blowing since yesterday morning I doubt ya have enough water left too launch over there , Violet canal is really low , just know there ainâ€™t no water in Delacroix now and for sure Hopedale is empty as well , got a few reports of some sacalait coming out of the north shore before the marsh drained Friday , good luck if yâ€™all can get out there this week ðŸ§™â€â™‚ï¸ðŸŽ£
Reply

Mandevillian
Yep Wiz,Strong NW winds ainâ€™t exactly water level friendly and Wifey,grandson and I taking ride to Loweâ€™s for some hardware to build small gate for older sonâ€™s aviary we just about finished building. He just picked up 30 more laying hens think he gets about 12 dozen eggs each week. Love this time of year as T Funky slabs should be getting nabbed readily. Gonna take ride to 3 Rivers Launch to check out water levels as it takes lot to lower T Funky water levels.

Mandevillian
Wiz,Wifey,grandson and I took ride to 3 Rivers Rd Launch and yes the water was very low,saw huge pick up with big azz trailer so he apparently had no problem launching and gonna hitch de Jeep to de SouthFork but think we gonna opt for launching at Menetre Park(4th st)in Covington vs the dirt ramp at 3 Rivers.Cold water temp gonna definitely present fishing challenge and Wifey don't care if we catch a single fish,time on de water is what she is looking forward to!!On another note,vastly underestimated volume of eggs older son collects from his huge chicken collection-he gets close to 25 dozen/week as opposed to what I said,12 dozen.Guess I missed by huge mark!!!

nutsabtfishing
Mandevillian Menetre park brings back memories my dad brought me there in the 70s to fish and he had made a homemade trolling motor out of an electric motor a shaft and prop he made somehow I am not sure but you know that thing worked I do not think we really caught a lot of fish at that time but does bring back great memories..

Mandevillian
nutsabtfishing,Today is Wifeys 60th birthday and our initial plan was to get up well before de damn chickens and roosters woke up but we realized how doggone cold it was so we slept in and gonna hit Menetre probably about 9:30 or so to somewhat take advantage of possibly warmer temps!!!Always joke with Wifey about being born on Groundhog Day and got her cute card at the local Winn-Dixie.Our goal is to do our best to nab a few fish and if nuttin' biting,take our chocolate lab on nice boat ride,though a cold one!!!Bet we see plenty Canada geese and possibly some woodies!!!Seriously thinking about checking out Pearl River WMA soon for not only crawfish but to see if by chance there maybe some fine sloughs with woodies on em!!

nutsabtfishing
oh and I wish your wife there a happy birthday :)
Reply

Mandevillian
nutsabtfishing,Thanks,Wifey got unbelievable text from our younger son,in Law School at MS College,and guess he gets his writing prowess from dad!!!Both of us happen to be Jesuit grads and a casual check of the Law Profession in LA will yield what he and I have known for years-Jesuit turns out tremendous amount of not only lawyers but physicians as well.Most of the Lawyers he and I know practice Defense/Corporate Law vs Personal Injury and lotta Specialists in Medical Profession.Bottom line is older son,St.Paul's graduate,has ton of chickens and few fine roosters and them son-of-guns crow quite early,mostly around 3-3:15 am!!!We had a great time today,tossing Spoiler Shad,Blue,with either a chartreuse or white trailer attached.Bet the sac a lait gonna start ganging up to spawn and dat is when dey easy marks,compared to once the spawn is over!!