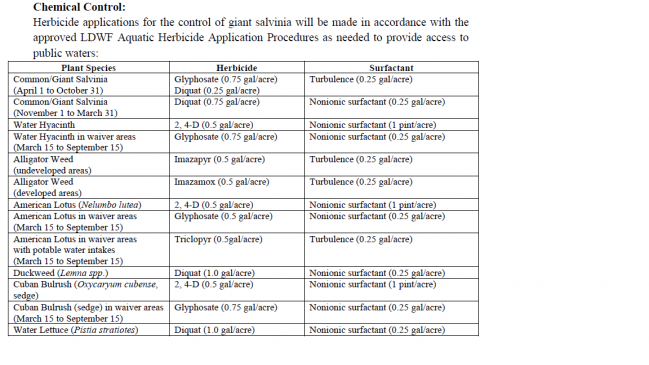 Posting for awareness as this was a recent discovery for myself. The LDWF has in place procedures for the management of vegetation in lakes, rivers, and marsh across the state. On public land, it appears the initiation of an intervention is based on complaints of vegetation limiting navigation of waterways. On private land, the owner/leaser can initiate these procedures with the assistance of LDWF. One part of this plan is the use of herbicides which are sprayed using airboats and aircraft. See the link below for details by location on the chemicals used, some having a log of the date and quantity used.

Personal experience
My personal experience has been the observation of occasional loss of vegetation in areas I frequently fish, and the corresponding scarcity of fish when the vegetation is lost. Chemical spraying isn't the only cause of vegetation loss, some can be natural(cold weather/water level fluctuations), and in some cases biological interventions (carp, weevils, etc.) are being used.

The controversial aspect
While the chemicals being used are EPA approved for use in the US, it doesn't take a lot of research to find toxicity information for these chemicals on the environment and biological life including humans. Roundup being a prime example of one of the chemicals being sprayed, is now banned in many places across the world for being a suspected carcinogen. Look into the history of Roundup(glyphosate) and you can understand why it has such a negative impact on the environment and human health. Yet our regulatory agencies still approve its use, showing in my opinion, a complete failure of stated purpose.

I attached the approved herbicide list from the Pontchartrain Basin, if you do a quick search on some of the chemicals being used its easy to find data on toxicity and suspected dangers.

When were we given a say in these practices? I'm not aware of a vote on the mass use of herbicides across the states waterways? I would propose this be put to a vote, if not stopped immediately.
Reply