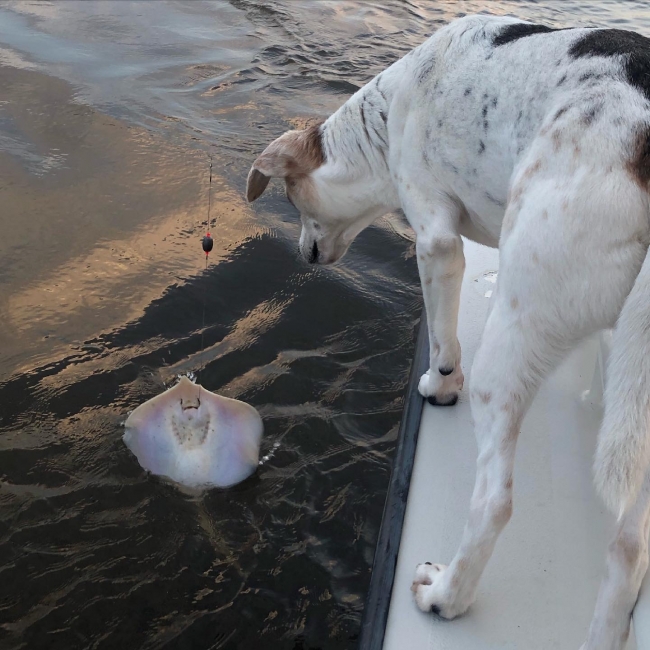 Well, I haven't posted a good fishing story in a while....so, I think I'm overdue!

We were supposed to make the trip to Delacroix before the butt-crack of dawn on Saturday morning. But, as luck would have it, I was checking tire pressures Friday evening on the boat trailer and found a nail in one of my tires. Wife clearly stated, 'We are not going anywhere with a nail in the tire!' So, I was first in line at Discount Tire on Saturday morning getting the trailer tire fixed. We made the long drive, stopping at Today's Ketch for a dozen boiled crabs and finally making it to Delacroix. Water was really low. I normally like launching at Serigne's...especially when there is a tournament going on at Sweetwater. But, the water was extremely low and I wasn't sure about how far I could back down at Serigne's with the big 24' Gaudet. So, we opted for Sweetwater. By the time we got the boat in the water, bought some live croakers (marina was out of live shrimp) and made the trip south to Black Bay, it was noon. I figured it would be okay since there was a late tide change. Tide had been on the rise all day but was still very low. It was brutally hot and not much wind. So thankful for a bimini top! We had a nice lunch which included some of those boiled crabs and then finally began fishing!

Water was clear in the bay and baitfish were jumping everywhere. No 'reel' fish, though. We fished a few cuts here and there and managed a fish here and a fish there. We saw a lot of gar fish in the water and not many reds & specks. I was hoping the tide change would turn the bite around. But, it really didn't. We did manage to bring in a nice little haul of fish to bring home. Ultimately ended up with some croakers, redfish, speckled trout, green trout and hooked one of those long-tailed flounder. My wife enjoyed the day and had a good time. Our dog, Spot, enjoyed overseeing all of the activities. It was good to be out fishing; and, we all know, a bad day of fishing is better than a good day of ___________ (you fill in the blank!).
Reply

CCAguns
Sounds like y’all had fun, Shamu. You nailed my problem with the guides’ reports. Have no real issue with the guides’ reporting, just rather see it under a separate title. Get tired of the advertising. The rest of us are not worried about limiting out as much as enjoying the fishing experience.
Reply

Thewizard7
BlueShamu : Thanks for ya report, I don’t have enough boat too venture far out there , but still manage to have fun playing with them trout & reds inside. Will be looking forward to ya next report Tight lines ???????????
Reply 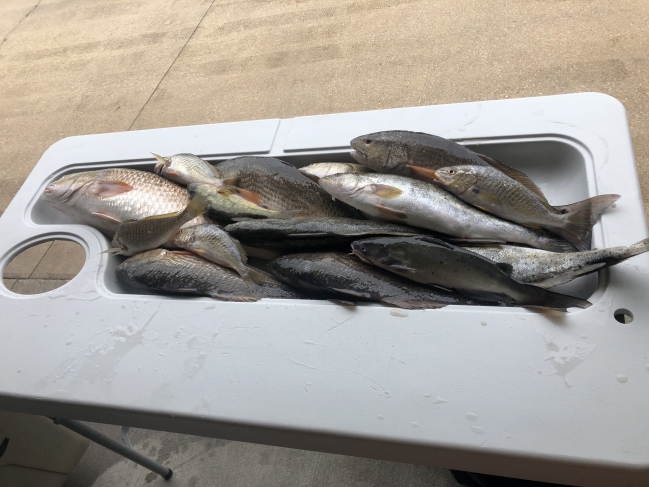 Well, we had plans to go fishing for Father's Day weekend....but, not sure that will be a viable option...at least not right now. I'll try to do more fishing reports of my own. But, just have to get out there and actually go fishing to write a report! This was only my third time out fishing this year since hunting season ended.
Reply

Mandevillian
BlueShamu,Not sure why my reply did not go through,here goes try#2.Nice haul,nice boat and looks like ya'll did very well!!I have not fished nearly as much as I typically do,awaiting receipt of needle bearing for the prop shaft of my outboard,tackling chore of tear-down and replacement of prop shaft on outboard and got lower unit torn down and got gears ready to re-install,just need needle bearing and it was set for delivery today,doubt dat gonna happen!!Nice big boat and yep,bet ya'll love dat top,keeps sun from beating ya up too much!!Congrats and NO ads for a soft plastic!!!