Good Day on the Coast 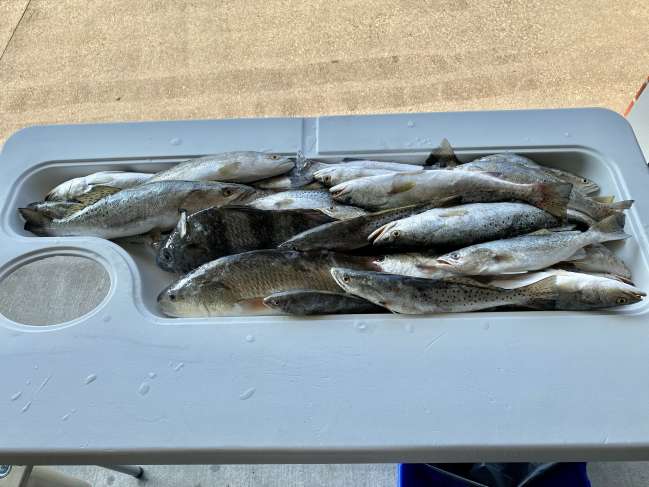 Well, I finally had the opportunity to put the Gulf Greens in the water. Thought we were going to have a disaster before we ever left the house. Figured it was probably about time to change the batteries in my trolling motor remote control as it seemed to be acting up the last time I used it. Pulled it apart and one of the AAA batteries had leaked juice all over the printed circuit board. Cleaned it up best I could and put fresh batteries in it. Thought to myself, I better go check this out. Glad I did…because, it was not working. This was 6:30 PM the night before we are supposed to leave my house at 4:00 AM! Well, I pulled a rabbit out of a hat and managed to get my hands on a temporary replacement!

So, next morning, a friend from Church and I were leaving Prairieville at 4:05 heading to Fourchon, We met and picked up one of my uncles along the way in Matthews. I was originally going to launch at the Fourchon Marina and throw a handful of croakers in the bait well for “just in case.” Well, I overshot the turnoff and made the executive decision to just launch at the public launch without any live bait. We set a course for the rock barges where we spent 20 minutes or so circling one barge not even getting a nibble throwing Vudu Shrimp, Matrix Shads, tight lining, under a cork….NOTHING!

We made a move and headed west to East Timb. Must have been where the fish were out there on the submerged rock piles and obstructions….you could have walked across the guide boats out there. We slowed down and watched but didn’t see a lot of action. We pulled into the abandoned structure that used to be on the island….the island that is not there anymore…There was a guide boat there and they were catching nice size specks with live croaker on bottom. We were tight lining Matrix Shad and working Vudu Shrimp under a cork around the structure and picked up a few decent specks, half a dozen channel mullet and broke off two big reds. The guide boat called his buddies in and now there were three guide boats. So, we made the decision to pick up and continue west to West Timb area. We pulled into a nice looking washout where the water was really moving out. Water was crystal clear beautiful and no wind. We got into a mix of specks that were either just shy of size or were really nice two pounders. It was a lot of action. We picked up a couple keeper reds and a just legal black drum. The sharks were pretty brutal and ended up with a handful of trout that we were reeling in. I don’t know if I actually hooked the shark or if he just didn’t let go of my speck…but, we made two trips around the boat before breaking off…and we didn’t see any more after that. Maybe he didn’t like the way that speck fought back?

We called it a day around 1:30 or so and headed back with 23 specks, the 2 reds, the one drum and that half dozen tasty channel mullet. We didn’t set the world on fire…but, it was a good day with good people!
Reply

Thewizard7
BlueShamau : Sounds like ya had a exceptional adventure , good weather good friends , got to see the good lord’s backyard and catching some fish was a bonus ! Great report looking forward to the next report from you , thanks for sharing your trip ???????????
Reply

Mandevillian
BlueShamu,Looks like mighty fine trip y’all made. Been keeping in close contact with AJfishes and he has been destroying log-sized specks with neat lure he got from a fellow who works with his long-time fishing buddy,Causeway Dave,and the lure seems to be enticing some very nice specks to inhale it. I joked with AJ,calling dat speck mauling lure,”speck spankers” and check out his last few You Tube videos. Nice trip y’all made headed to deer lease to start fun project of getting food plots at least cut in order to sow ironclay peas that tolerate brutal heat.

BlueShamu
Mande, you gonna have to post a pic of this 'Spec Spanker.' I'm dreading getting ready for deer season! I definitely need to get out there and have a look around. But, after last year's late and brutal hurricane season, not sure I want to do any early prep this year and have to re-do stuff after a storm tears everything up like last year! And yes, the August heat is somewhat of another deterrent!

Wiz...it was definitely a nice day enjoying what the Father has created! The water was beautiful, the sun stayed behind clouds most of the morning, the wind was still at times. But, it was just light enough to keep the air moving over you. The company was definitely great and the fish were definitely a bonus!!
Reply

Mandevillian
Blue Shamu,You and those reading our banter gonna realize how fortunate I was yesterday busting it on my deer food plots. To start with doggone utility trailer wires are terribly corroded and had to scratch and scramble to fix right side ONLY to get to lease and realize left side was needing fix and used set of keys that not only had lease key on them plus boat keys and keys to bunch of locks. Somehow lost set of keys in process of bush hogging and al least I left gate to lease unlocked. Got home and realized keys nowhere to be found and Wifey and I went back to lease and back-tracked to where I suspected keys might have been lost.NADA and Wifey got on Internet and found Leader RPM and I got them on line and best recourse was for me to order new ignition switch with kill switch lanyard. Coast Guard regulations requiring functional kill switch and mine long ago gave up function. Got replacement switch arriving Th and already got control box split gonna wait til new switch arrives so I can replace one wire at a time. Next steps are to cut lock off utility trailer and get replacement key to lease easy step.

marosol
Seems you had fun guys. Thank you for sharing your experience. Regards from | Boston Decking
Reply

johnlead
Really informative and very useful post. Thanks for sharing this blog with us. Keep it up and always keep posting such kind of information.

johnlead
This is my first time visit here. From the tons of comments on your articles,I guess I am not only one having all the enjoyment right here!Website/a>
Reply