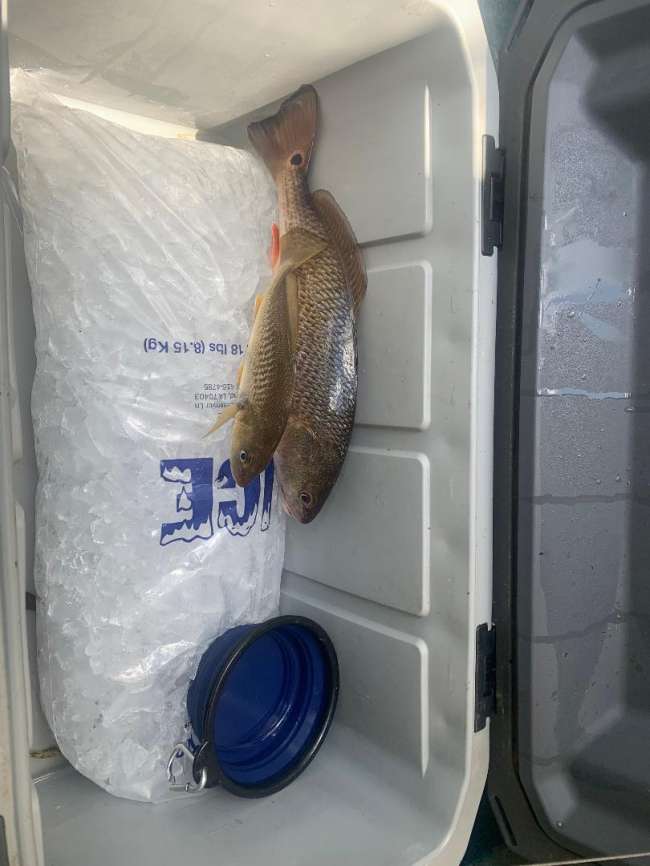 With the nice showing of fine and fat reds this past Friday,de Nuck and Futz Duo hit some dem exact shorelines today and also made a side trip to the Causeway trying to find some willing reds.Got us an early start and started chunking lures along shorelines,noticed lot less mullet activity compared to last Friday and Th and did scare up big ole shark dat nailed a mullet,looked like he cut it in half and with nice polarized glasses,saw de beast track down Johnson Silver Minnow with chartreuse color and thankfully,he veered off at last minute or I woulda been tangling with shark of almost 5 ft in length!!We stayed the course along shorelines,had great in-coming tide and even ventured way deep into marsh,all to no avail and we did spook a few reds,spooked plenty of sharks and I did have a few fish nab spoon but NOT get hooked,possibly fairly large alligator gar.Looked to W and Causeway was a-calling us and we made our way out there,tossed Berkley Gulps and think Nuck was tossing Lemonhead Matrix Shad and bout the only lure enticing anything to strike was ole boring Berkley Gulp,Swimming Mullet in chartreuse.Nabbed a bunch of pesky ladyfish and finally boxed keeper red,right about 16.5 in and not too long after boxed decent croaker,stuck both on ice and waiting til grandson gets home so I can clean those two.Hope to get back out later this week,possibly Wed.My personal belief is that the sharks I have been seeing have displaced the reds and these sharks nothing to play with with largest over 5 ft long and have seen a few 3-4 ft in length,plenty big enough to slice a red in half and I did notice some serious battle scars on side of head of 32 in brute of a red I fought this past Friday,bet a shark may have nabbed him as I was battling this red!!!

GB3
Dang, crazy that many sharks along shoreline of Lake right now. Bet you two die hards did some teal scouting while deep in that marsh. Blue wing action not far away!
Reply

Mandevillian
GB3,As a matter of fact we were hoping to see few teal but the only waterfowl we saw was fine group of four mottled ducks and we talked bout Ole times,he remembers when the limit on big ducks was reduced to 3 and dat was quite a bit before I started waterfowl hunting. I do recall when the limit on teal in teal season was four and limit on mottled ducks was three. Hope de Quack Shack enjoys awesome teal season. Hitting same general area Wed and de Wiz already shot me pic of nice red he just caught

Mandevillian
Chatted with LAWLF biologist(same one I met few months ago)at Rigolets Marina and asked his opinion on whether large sharks could run off reds and his comment was that sharks like the one I spotted chasing Silver Minnow this past Monday have as much testosterone as Bull Elk and my take is the larger sharks have run off some dem fine reds in certain shoreline spots that just last Friday had plenty of fine reds cruising and smashing mullets!!Guess de survival of de fittest certainly holds true out there!!