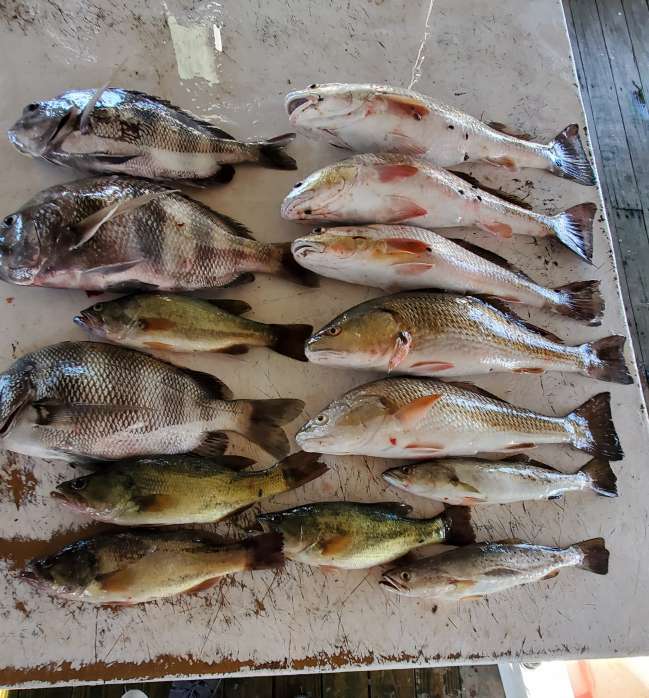 I used to post my reports in the Bayou Coast Kayak Fishing Club forum. Now that BCKFC has basically abandoned its website and forum to cater only to social media (FakeBook), I will try to post here in Louisiana Sportsman in hopes of stirring up the interest of fellow kayak fishermen! For those who are interested, I fish primarily with live and/or dead shrimp, often using a drop shot rig on the bottom. I occasionally try Gulp, plastics, and hard baits, especially to compare lure effectiveness when fish are hitting the shrimp hard. I fish from a 2016 Native Slayer Propel 13 kayak - best kayak by far of the 10 or so I've owned over the last 11 years!

Now for this week's report:
I finally had a chance on Thursday, 10/7/21 to try out Shell Beach following hurricane Ida. I launched at Campo's wharf around 6:30 a.m. loaded with live shrimp! Wind was higher than expected, but remained between 8 and 15 mph all morning from the NNE. Shell Beach kayak options generally include: (a) paddle/pedal a mile to Lake Borgne and fish the structure there, (b) fish the MRGO rock jetties, Bayou Yscloskey, and adjacent marsh (least paddle distance), or head SE or NW in the MRGO for 1 to 2 miles to reach more distant channels! I headed over a mile NW and found moving water as expected! Using live and dead shrimp on a drop shot rig, I managed to put 5 redfish between 19 and 21 inches in the cooler along with 3 large sheepshead, 4 bass, and 2 specks! Additionally, I released 3 redfish ranging from 22' to 26'! It was perhaps my best day of the year. An interesting note: Although most of my fish were caught about 2 miles from Campo's, my largest red of the day (26+ inches) was caught along the rocks in Bayou Yscloskey next to the MRGO! The good post-Ida news is that largemouth bass have survived well hurricane Ida's saltwater surge and the storm seems to have restocked the saltwater species!!!
Reply

BlueShamu
Nice mess of fish and good variety. Thanks for sharing the report! Look forward to reading more.
Reply

Mandevillian
Very nice haul,indeed,had ya a heavy chest of fish!!Love fishing outta either yak or Chapman pirogue and de Wiz getting me way too enthused bout chasing reds,sight-casting.I am on NShore and used to routinely pull some fine reds outta what was formerly lush grassbeds all along shorelines but last year's barrage of storms plus Ida this year did a number on those fine grassbeds!!Right now vicariously fishing through folks like you and de Wiz,intend to change dat pronto!!Thanks for awesome report and pics!!

extreme32
Essay assignments can be technical, general or industry-specific, which means that the student needs to professional paper writers every aspect in detail before starting the writing task.
Reply