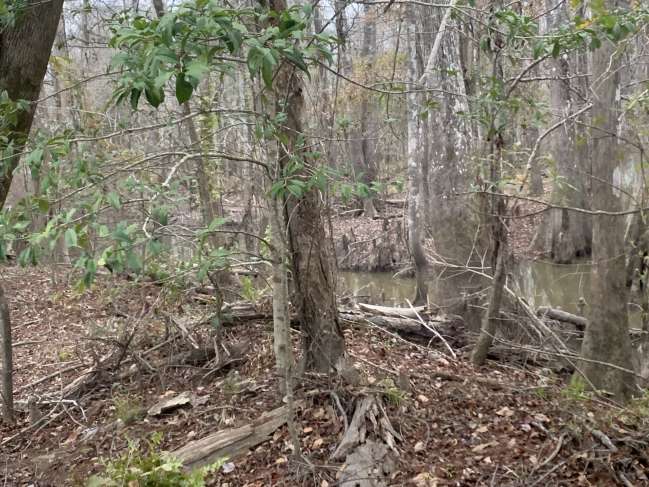 This past Wednesday,I had outdoor writer,John Manion,meet me at one of my favorite Honey Island Swamp ponds,I got there around 4:15 am and he paddled to where I was hunkered down about 4:55 and right away told him I was hopeful that we would see a few fleeting woodies and we stood in water about mid-leg high and his fine British Lab,Deke,was hunkered down in John's Chapman as water was a tad high(probably not ideal for woodies,unfortunately)!!Legal shooting came and went and we had one woodie,a solo nowhere near in range then three zoomed by,making ZERO sounds and we did not get a chance at them.Since John was headed to work and also had a trip to Dewitt,AR set up,told him I could get my Chapman loaded onto new trailer and somehow,my cherished engraved money clip musta fallen INSIDE waders and I did not know it,later that day went to fill up tow vehicle and keep wallet in left pocket,money clip in right pocket and that was when I noted absence of clip!!Told Wifey and later than day,she and grandson and I drove back to launch,searched around and figured it was a lost cause.Decided I would spring for a replica and the folks at DeBosq in Mandeville referred me to Thomas Franks,showed Thomas a pic and he said he could make ultra-fine sterling silver replacement asap!!Hated telling my mom but she took the possible loss of clip in stride and offered to split the cost of replica with me.Today,headed back to Swamp,solo trip,and when I put right wader boot on,felt something somewhat hard and possibly metallic in right wader boot,so I did the logical thing,took wader boot off shook it but saw nothing fall out but shined light on gravel and lo and behold,there was engraved money clip,minus whatever bills I had attached to clip so I thought perhaps clip was found by someone who did not need 'AEC' engraved(ole English monogram in yellow gold)money clip and took bills off and dropped clip.Hunted and texted Wifey and my mom with news that I did locate clip but no money and I was ecstatic!After a non-productive wood duck hunt,paddled to launch and when I removed waders checked right side and lo and behold,there was a $10 bill,a $2 bill(63rd birthday gift from fellow Abita KC buddy and a $1 bill,grand total $13,hence Lucky $13!!Got in touch with jeweler and got other plans for him,Wifey has 61st birthday on Ground Hog Day!!Hard to believe my extreme good fortune!!!

Mandevillian
Doggone it,Glad this report went through,seemed like it was NOT going through!!Add to the report dat de Nuck and Futz Duo ventured out today(only de Nuck and Futz Duo plus one other brave hunter)seemed to be out and about today!!Hunted separate blinds like we always do and the habitat where we have hunted more than INCREDIBLE,key missing ingredient,ducks!!!Water was very low and over 20 some odd years of hunting in same general areas guided us to what USED to be very productive hunting spots,pains me to see extra-ordinary duck feed and places to easily blind up yet devoid of ducks,save for a very few well-educated mottled ducks,with their PHD in duck-ology!!!Had a brave hunter good bit W of me today and thankfully he fired a shot that got up two pairs of mottled ducks,one pair came dangerously close to me and I did hit one,just not quite good enough to drop him and dat was de extent of today's hunt.Word to de wise,if ya venture out tomorrow,have a back-up plan(s)as Lake P was ridiculously low today and we actually found a cell phone at the launch,trouble was it appeared to have been run over at least a few times!!!Hope tomorrow's hunt de charm,found a promising new spot,hope we do not encounter dreaded mudflat central tomorrow.Think ole John Manion gonna pen a re-cap to be published in Feb Sportsman,STRONGLY advised that he NOT divulge any specifics bout locations as who outs their favorite hunting spots,especially those available to the public!!!Been decent season for de Nuck and Futz Duo,plenty of fine ducks hit de straps!!!

Lesly Jacks
I like this site it’s a masterpiece! Glad I noticed this on google. Check out www.tejadosgijon.com for more!
Reply