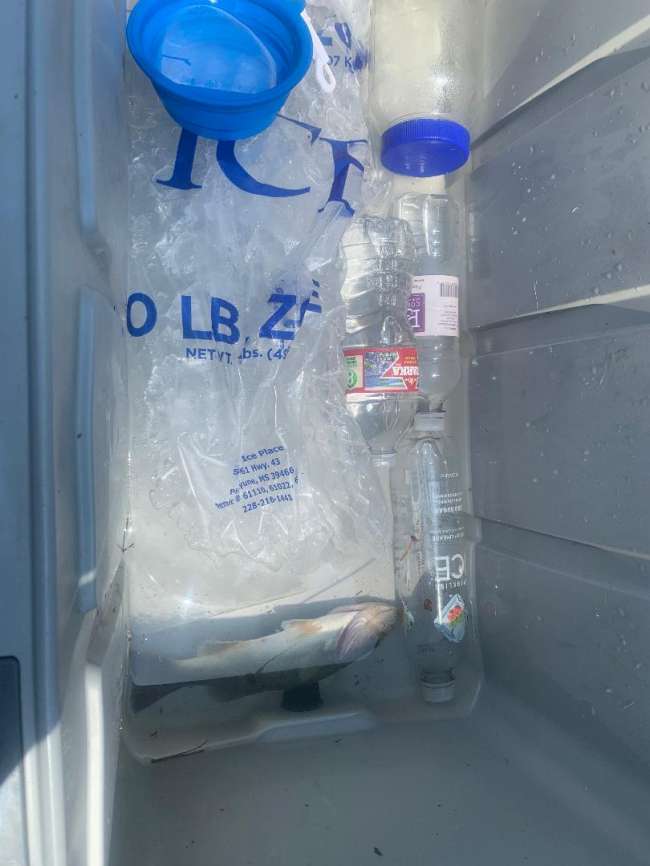 Second try to post today's report!!Wanted to hit re-growing fine grass beds but once again NW winds took care of dat,hit No Boat/No Idea Bayou and tossed and tossed Shaker 3.75 in in Vampire-no takers swapped out to bass gear in the fashion of Culprit Craw Dad(Wifey and I call dat worm Benson Boogie worm)and did not take too long for fat but short marsh bass to gobble up worm,tossed him on ice and on way out had HUGE alligator gar,probably every bit of 6 ft stud,come within a hair of nabbing Culprit worm,woulda been NO fun with 12 lb Vanish fluro spooled up!!Did make my way back to fine grass beds and saw another fisher on opposite side from me,not sure what he dragged up,I had a few feisty fish swipe at Tsunamai Chartreuse spoon.Need to get back out to those grass beds,plenty reds patrolling them and I spooked a few and yesterday spotted fine gar,probably 4 ft long cruising one of those beds and also saw big sting ray yesterday,never a bad thing as they target same tiny crabs as reds do!!Hope to find either more favorable wind conditions or another set of grass beds to toss spoons and spinnerbaits across!!!

cathyscherer
Need to return to those grass beds; there are many reds patrolling there and I startled a few of them. Additionally, yesterday, I noticed a large sting ray and a nice gar that was approximately 4 feet long wandering one of those beds. https://www.plumbinggrandeprairieab.com/
Reply

Mandevillian
Yep,Spotted bout four ft gar plus spooked bunch of reds of fine sizes with one close to four ft long probably biggest red I have seen out there in long time. Water pristine and it requires not only stealth but ability to make super-long casts. Hope to get back out pronto.

Brion
You did a good decision to find your way back for your safety. orlando limo
Reply

CCAguns
Satellite or radar views of weather work best. If you believed the weather reports, you’d never get to fish!!!
Reply

Mandevillian
Those grass beds a-loaded up with reds and makes perfect sense as the big red fulla tiny crabs and those crabs hang out in the grass beds trying to hide out from the reds. Gotta go where de bait hangs out,NO DOUBT.