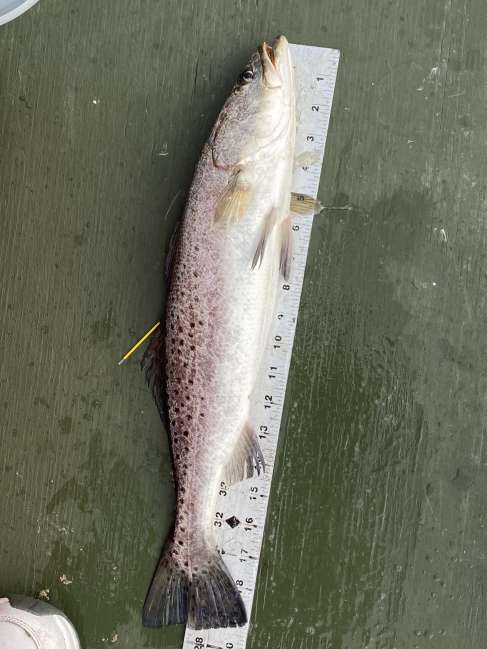 Yesterday I went to Hopedale , water was up coming in , using twitch baits and soft plastic , managed to pull out a few nice trout keeping 5 for our supper and tagging a few to fight another day , good to be back out again
Reply

Mandevillian
Managed to squeeze in few hours to hit Trestles yesterday,not a speck one but did lose fine speck in Bayou Liberty and three amigos(duck fanatics)managed three fine reds,one about 25,one 28 and brute of 36 inches,all caught on soft plastics.I toss EXCLUSIVELY Lunker City Shakers,3.75 in in Jungle Jazz(best imitation of baby croaker out there)and we ran into none other than de Fishing LA Produce Man(was tossing Swamp Lures)and he said they had 7 specks,ended their day with 9 and he fished basically same area Wed,watched his You Tube,and he watched us hooked up to fine reds under big flock of gulls and later saw me hooked up to 36 in red dat took quite some time to tame with 12 lb test fluro.Nice haul,Wiz,been extremely busy getting with all our Medicare folks!!

P.S. Had to joke with AJ bout his flounder he nabbed and unfortunately had to toss back-Nick nabbed equally fine flounder dat self-released-saw ZERO ducks!!!
Reply