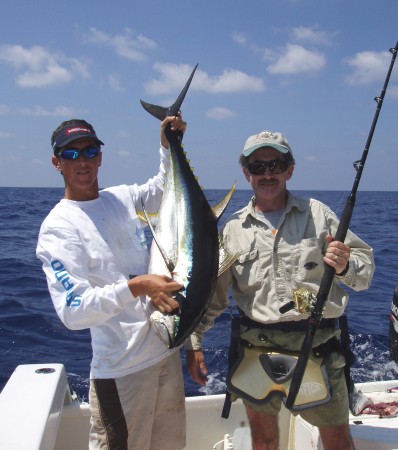 George Layton drove over to Venice from Arkansas to see what all the fuss was about regarding the awesome fishing he had read about. His buddy, Ken joined him from North Carolina, which is home to quite a tuna and marlin fishery in its own right.

Before they headed offshore, I sent them out with Capt. Jeff Fuscia on Thursday to warm up their muscles with reds and specks.

George invited me along as they only had two anglers to serve as back up angler, mate and photographer. When I met them at the dock Friday morning, conditions couldn't have been better -- light winds and low humidity. We loaded up their gear and they settled in to the comfortable E-Sea Rider bean bags as we headed out to catch bait. When we entered the Gulf and spotted acres of threadfin herring, I knew it would be a good day. Using FRENZY sabikis, we caught plenty of the greenbacks which we careefully placed in the livewell and headed for the fishing grounds.

Capt. Hunter pulled up to one of the floaters and I got the guys set up with fighting belts. Just as we were getting them adjusted, the reel screamed and George grabbed the rod as a big bull dolphin, whose acrobatic jumps drew "oohs and aahs" from everyone, hit the air over and over again. With our first fish in the box in mere minutes, things were looking pretty good.

Kenny was up next, and before he could his belt on, the second rod went off -- but it wasn't a dolphin this time as the line streaked straight down. Now Kenny had fought a tuna before, but not in 3,000 feet of water, so we told him he was in for a slug fest. He fought the fish as his buddy George looked on. After a 25 minute fight, Capt. Hunter gaffed the yellowfin and swung it into the boat.

The day continued with dolphin grabbing almost every live bait we put out. George and Ken just couldn't believe that we have THAT MANY fish here. George still hadn't gotten his tuna, so we switched techniques and tried to get the baits down using a cajun downrigger -- lead wrapped around the line with a rubber band -- to get the baits down quicker. It worked and soon George was hooked up to his first yellowfin. After fighting the fish for about half an hour, Capt. Hunter stuck the tuna and swung it over the gunnels as I took care of the initiation honors.

"What a fishery! said Layton as he relaxed and tried to rehydrate himself.

We continued to catch dolphin until we reached a self imposed boat limit of 12 and then the guys played catch and release until around two o'clock.

In our conversatoin, I found that George had never fought a billfish either, so Capt. Hunter put out a spread as we motored away from the rig and headed towards home. We hadn't traveled more than a mile and a half off the rig when the rigger popped and Capt. Hunter yelled "MARLIN!!"

The big white marlin missed the rigger bait, but came back to smash the right flat line which was rigged with a large pink and blue Makaira "Mars" Pulling Bait and hit the air.

George got harnessed up and the fish hit the air for a second time as Capt. Hunter and I cleared the lines. After a short 15-minute fight, the marlin was boatside where we snapped a number of photos.

George was speachless...his first tuna, first dolphin and first marlin -- ALL IN ONE TRIP and before 2 p.m.

The decision was made that it couldn't get any better than this, so we headed North. On our way in, we got a call from another boat with the Coast Guard alongside for assistance with a stranded crew. We weren't far away, so we swung by and picked up the six appreciative guys.

Back at Venice Marina, we took a group photo before Hunter gave George his dunking for catching his first marlin as all the onlookers cheered him on. Hunter cleaned and bagged the tuna as George and Kenny worked furiously to stuff it into their overflowing ice chests.

I don't see how fishing could get any better than it is this summer. Grab a crew of six, pick up the phone and give me a call and I'll promise you a day of fun and fishing to remember aboard FAST ~ WIDE ~ COMFORTABLE boats with TOP CAPTAINS.

Capt Jeff Fuscia Delta Dawn Guide Service
Thanks George and Ken for the Mahi Mahi. It was great we ate all of it the next night.
Reply

FishIntimidatorProGuideService
I could use some...
Reply

Since it's your birthday...Happy Birthday.

For your present, I'll try and get you & Shelley some dolphin as I'll be offshore again this weekend tearing them up!
Reply