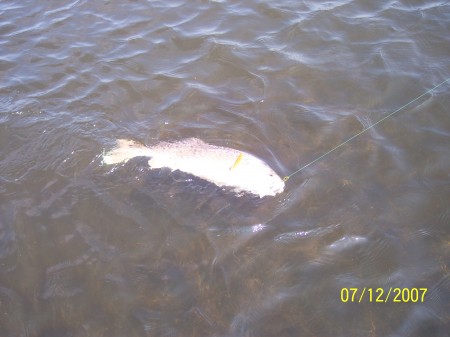 Woke up this morning thinking we we're going to the real Big Lake, Lake Pontchatrain to try to spank a few big trout. Walked out the door and knew that wouldn't work with the real stiff breeze. My daughter and I headed off to the Chef to try to stay out of the wind and make the most of it as she had decided to play hookie from camp to go fishing. When we arrived at our first spot the tide was almost finished coming in. We couldn't get any reds to cooperate. Off we went hunting heading further east. We started sightfishing but they weren't playing. We found a school of 25 to 30 inch reds on Lake Borgne shoreline and were able to entice a few. Had one 30 inch red sitting in one spot 35 ft away like a bass on a bed and threw weightless plastic shrimp to him for five or six minutes and he never gave them a second look. Finally he moved on when my weightless shrimp settled down on the bridge of his nose. We managed five red bites and caught all five and two nice trout drifting weightless plastics off a point. My daughter was doing good on her big red until he made a hard run and her hand was against the line and she got a pretty bad string burn, but she managed tears and all. Went into some ponds later as the wind really picked up and they had whitecaps, the boat would cruise about 6 miles per hour without troll motor on. Doesn't matter had a great morning and from the pictures looks like my daughter enjoyed herself too. I imagine Lake P. had five plus footers at this time, so we were happy where we were at. A beautiful morning and pretty cool, overcast alot of the time and 25mph breeze.
Reply

fishpuncher
ICW
did y'all go back in Deedie or 7 Lagoons at all?
Reply

bigjim
Names unknown
I have no idea what the names of the lagoons/aka duck ponds are that I ran through and checked. I don't use a map or gps, I just run and don't even think about it. I pretty much ran every pond from the chef (know that one, had a camp there many years) to unknown pass (know that one too) and most of Lake Borgne shoreline. Where ever I have to go to find good water is where I go. My boat will run in almost anything so I just cruise from pond to pond and right along the shore of the lake looking for good water.
Rule # 1 Find good water and you'll find fish, everything else is elementary.
Reply