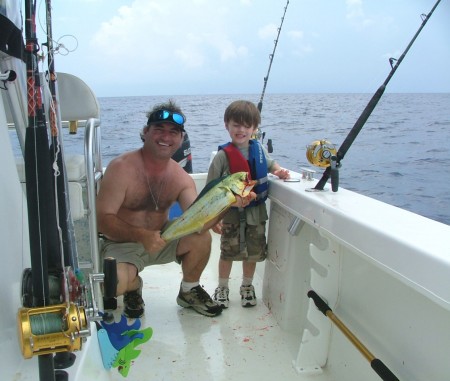 Chris Crowe wanted to take his son Christopher on his first offshore adventure. He called to get my opinion and discuss it with me and I told him it would be fine as long as they properly prepared for the day by bringing along Christopher's own personal PFD. It is always important to have a properly fitted life jacket and one that is comfortable enough to be worn all day as required by law.

I met Christopher that evening and we went over safety using words that a child could understand. We told Christopher that whenver a big fish was gaffed, that he should move all the way to the bow and sit on the bean bags until the fish was under control and in the fish box.

They headed out Thursday with seas a bit bouncy, but the little lad settled down in the E-SeaRider bean bags and took it well.

The following is an email from Chris Crowe:

Once again all I can say is thanks. On Thursday we had a crew from Meridian including myself, Billy Stafford, Jacob Gray, Bobby Wilder and Christopher, my 6yr old son.

We had a great day on the water that included 5 nice yellowfins and 6 dolphin. Capt. Hunter did a great job and the fish were hungry. Christopher is totally hooked and he did great on the boat catching 3 dolphin and helping us keep the deck clean.

I was a little worried about taking him at that age but now I will never go without him.

If you are ready to make some memories. give me a call and I'll schedule your trip with one of the most professional and productive captains in Venice. Check out the PHOTO GALLERY and SUSAN'S REPORTS at www.reellouisianaadventures.com

Capt John L
Great post, Susan, and I'll have to agree with you on your recommendation of Capt. Hunter!
Reply

meauxjeauxx2
Are you crazy!Hec I had 2 8 year olds out fishing in buras the other day and I was going insane.Nah,just kiding,it is great the way you handled this with the saftey precautions and setting the rules straight before the boat even left the dock.Susan you are first class in my book.
Reply

Reel Louisiana Adventures
Yes, it really helped to take the time BEFORE the trip to explain how dangerous a big thrashing fish can be. Once you get out there and things are happening quickly, children get caught up in the moment (as do adults) and sometimes try to look over the side only to find a gaffed fish coming over the gunnel right at them. Chris said Christopher did everything we talked about and really had a good time...he wanted to know if they could go again the next day!

The photo of him with the deck brush is priceless!
Reply