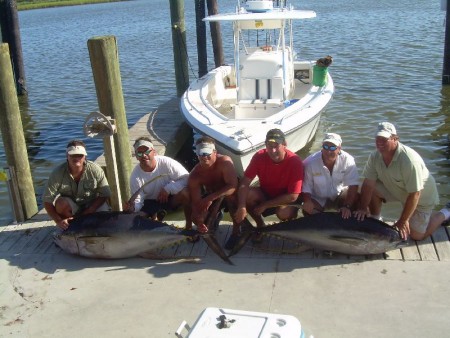 It started out as another day blue water trip on the Cajun Venture, but ended up as a day to go in the books. We had 5 Yellow fins, several bull dolphin and black fins. We felt that our day was almost complete. We decided to hit one more spot. 5 minutes after putting the engines in neutral the 3 hour battle began. The first of the 2 to hit the live bait was the 233.25, soon there after we hooked the 170.2. We found ourselves fighting the fish in opposite directions. The bigger of the 2 took the reel to the metal 4 times. After 2.5 hours the smaller fish was finally in the boat. 30 minutes later the bigger fish came up tail-wrapped and dead. At this point what we thought was going to be a good trip turned into the reason why we fish. I only wish my mom was here to see it......Cajun Made Charters 225-931-7306
Reply

catfish0369
Looks like they'll be plenty for sushi for a year.
Reply

Allroundfisherman07
And i thought my catfish was big. great job
Reply

Finfeatherfur
Congrats Chris, and don't worry, Mom was there! Great story and thanks for sharing it w/ us!
Reply

Reel Louisiana Adventures
Congrats, Chris. I was on the water that day and heard about the big fish on the VHF, but no one could tell us who caught it.

Too bad you had to fight that small 170-pounder to get it out of the way so you could land the BIG ONE!!

I hope the customers appreciate how special of a day that was.

Bet y'all had some kind of fun getting that big monster in. Congrats to you and the whole krewe. Don't worry about your mom, she was there in spirit routing you on...Trying to get my dad to get off the money and take me and the family fishing.
Reply

Tim LaFleur
The State record isn't much more than that is it?? I think it's right around the 240 245 mark.....I don't know if I could fight a fish like that by myself....Wow, what an experiance.
Reply