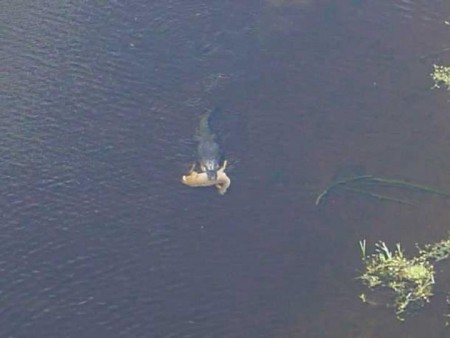 Somebody sent me an e-mail with photos and story of a 23foot 1 inch alligator in Lake Weiss in Alabama. The pics are cool if they are real. The gator is swimming with a full grown deer in his mouth. This might be old news but it is the first time I've seen them. I'll try to post the pictures, but I'm not very computer literate.
P.S. I only got 2 of the pictures to load, the last pic was of the gator hanging from a frontend loader, it was shot by game wardens!
Reply

This is supposed to be the actual story behind the pictures.

I have been hunting alligators all my life and have never seen one larger than 13', but not saying they don't get larger. There used to be a skeleton at Rockefeller that was around 16' and that was supposed to be the largest ever found.

redfish
23 Feet Long?????????
There is NO WAY that this alligator is 23 feet long. You can rough estimate the length by estimating the size of the deer. I would estimate the length of the alligator at 12 - 13 feet. If it were 23 feet long, that would have to make that deer 10 - 11 deet long from the front chest to the tail...which would make that deer the size of a big horse.
The alligator is big, but I call BS on the 23 feet.
Reply

cullin
Lake Conroe Texas
Saw that about a year ago on the net. It was in lake conroe TX.
Reply

gobblercrazy
work
used to work at an ALLIGATOR farm and did a lot of work at the processing shed(skinning and butchering them)during wild season trappers would bring in their kills and wed buy them and skin them out biggest i seen brought in from wild was just an inch or 2 shy of 16 foot and it was huge!!!!most were 6 to 12 foot the one in the pic is big but i dont think hes any bigger than the 15 plus we skint out at the farm.just my opinion i could be wrong!!
Reply

8point
JOKE
The only thing real about these pics is that nobody knows where they came from.
Reply

ScubaLatt
Big gators
Guys: Here is big gator story for ya'll. When I was in high school in 1988 I fished Kazan's Lake (ck. sp.) near Ville Platte. I fished in a 15' duracraft with a 20 Mercury. I saw an alligator surface right near 2 tupelo gum trees. This gator was so long it's head was to the left of one tree and it's tail extended about 1 foot to the right of the other tree. I had to see how far apart these trees were so I parked my boat between them and had at lest a foot between my motor and the tree behind me. I estimate this gator was 17 to 18 foot long. The same day I was fishing for sac-a-lait along the bank and saw a snake slithering into the water. It was about 8 or so inches in girth and was at least 20 feet long. I got so scared since I was by myself that I immediately went back to the launch. I was the only person fishing the lake that day and NO, I had not been drinking any beer!!! I never went fishing alone to this lake.
Reply

The sight of a 12 to 14 foot-long alligator is something south Georgia folks see occasionally, but few have seen one take an adult deer out to lunch. Actually -- for lunch.
The photographs of this deer-eating alligator were taken from the air by Terri Jenkins, a U.S. Fish and Wildlife Service District Fire Management Officer. She was preparing to ignite a prescribed fire at Harris Neck National Wildlife Refuge, about 40 miles south of Savannah, Georgia, on March 4, 2004. The photo has

“One advantage of fire work is you get to see that 12-14 footers are common from Santee National Wildlife Refuge in South Carolina to Coastal South Carolina to Georgia’s coast,” said Jenkins. “It looks like the alligator population is doing extremely well.”

This one was at least 12-13 feet long. Jenkins said that some bull alligators have a 35 inch girth.

If you’re a deer hunter, the refuge hosts an archery hunt on September 15-17, 2004 and a gun hunt November 19, 2004 (only 150 permits will be issued). For more information, and to obtain an application, visit: http://harrisneck.fws.gov/. Applications must be received by August 31, 2004 at Savannah Coastal Refuges, 1000 Business Center Drive, Parkway Business Center, Suite 10, Savannah, Georgia, 31405.

The alligator will not be charged with hunting deer out of season, animal cruelty, or any one of several possible water quality violations. He may, however, be charged with being one mean gator. If we could catch him... Or wanted to...

TRIGGERHAPPY
FYI
Went to the Audobon Zoo today with the family. At the pond with the big alligator, there was a informative article stating the world record alligator was 19'2" long caught in 1890 in Vermillion Parish,La. It said they hatch at approx. 9" long and grow about a foot each year for about 5 to 6 years. After that they grow several inches each year after that.
Reply