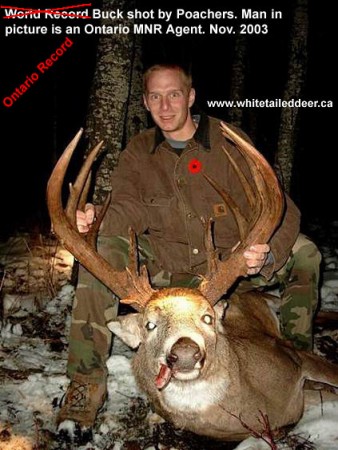 This massive buck was poached at night in Ontario Canada by 2 men from the U.S.
Reply

Jefroka
Poachers
This story happened a couple of yrs ago. It was father and son who poached, last name Straughter, sp? Anyway the son I'm pretty sure use to be a cop out of Greenwell Springs and ran a pig hunting business.
Reply

Death From Above
AHHH
ok.. it was sent to me.. i thought it was recent... anywho
Reply

cmacks
???
I dont know if there's any truth to this, but I heard the guys were from Baton Rouge. If so, there making us proud.
Reply

Pale Rider
Dryden Buck
There is a lot more about this guy if you do a google search, but I'll Leave it up to you guys to find it out!! Pale Rider.

DRYDEN - A Louisiana man has been fined $4,000 and banned from hunting for two years after pleading guilty to killing a trophy deer north of Dryden in 2003.

Court heard that on November 10, 2003, Ministry of Natural Resources (MNR) conservation officers received a complaint about a deer being shot about 16 kilometres north of Dryden. The investigation, helped by conservation officers in Louisiana and Mississippi and police in Baton Rouge, led to two U.S. residents being charged.

A second man will go to trial in Dryden on October 19 this year.

Justice of the Peace Robert Michels heard the case in the Ontario Court of Justice, Dryden on July 20, 2004.

Horns_N_Feathers
i screwed up
i shot a deer in my back yard a month ago ... some say after hours and some dont ... well i had to shell out 1400 for my ticket and another 500 for a restocking fee ...
Reply

BangFlop
Well
As long as they restocked it in your backyard.......
Reply

Brooke stroughter
Re: Makes me sick
How do you know this ?
Reply