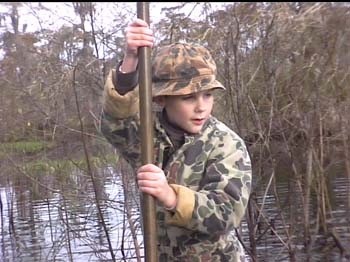 Hey guys, just thought y'all would enjoy some pics of the Good Old Days. I really miss 'em, and don't see it ever coming back in this (Manchac) area.

By the way, don't miss out on those photo opportunities just because you don't have a third person to take a picture of you and your son(s). The photo of my son and me with the ducks on log was taken with the aid of a tripod and the timer on the camera. You can pick up a good enough tripod for anywhere from $50 on up to several hundred. The one I used was a Slik brand, and I never left home without it. So, go fork over the money now!!!!!
Who cares if it's planted in 2 feet of mud and a foot of swamp water?! That photo of me and my son is, to me, truly priceless.

Coot
Great Pics!
Thanks for sharing. When I first started duck hunting back in 1978 we use to hunt Manchac by walking in from the RR tracks and we hunted flooded timber on the Ticfaw River. You are right. That was the good ole' days. My last good seasons at Manchac were 1999-2001 and I finally quit hunting out there in 2003.
Reply

MEV
Good Ole Days No More
Great pictures, the "sunrise on the bayou" picture on a privious post reminds me of a spot off the Natalbany River my son and I loved. If you would take someone out there now and tell them the area used to be filled with thousands of greenheads, they would say you were full of it, because now it's devoid of birds. This is something I can say about many of the areas I have hunted in the past forty years. At this rate my grandson will never experience the priviledge of watching the sun come up in a swamp and birds locked up to land in the dekes.
Reply

TurtleNO
water hycacinth
The problem with that area and many more places was the accidental introduction of water hyacinth. They are killing the swamps. I know they have chemicals that will kill the ones on top, but that is a temporary fix. Something has to be done or our children and grandchildren will never get to experience joys of the past.
Reply

Coot
Actually,
It's not the water hyacinth that is a problem, It is the GIANT SALVINIA that has taken over most of the flooded timber in that region. Maurpeaus WMA is absolutely choked with it. I use to hunt this area in the 80's and it was better mallard hunting than Stuggart, ARK. Not anymore, thanks to the Giant Salvinia that has taken over.
Reply

gauger
..................
The biggest problem is that those who have the power to do something about it, do nothing. And we elect and re-elect them every year.
Reply

Wishin I Was Fishin
Hyacinths
Coot, you're right. And, I'll take hyacinths over salvinia ANY day! Salvinia has had a major impact on migration patterns of mallards, widgeon and grays, in the Lakes Pontchartrain/Maurepas and Lafourche basin, and more. Heck, the whole region may just as well have been paved over, as far as duck habitat is concerned. To quote Benny Grunch and the Bunch, "it ain't dere no more"!

Just for perspective, the Maurepas WMA comprises approximately 70,000 acres, which, at 640 acres per square mile is 109.38 square miles. That's a very small part of the entire Pontchartrain/Maurepas/Lafourche Basins. Make them disappear, and you can understand why even the good habitat in these areas doesn't have any ducks!!!! Salvinia, arggghhhh!!!!

It's too bad that most of the guys reading this never experienced the truly unbelievable swamp hunting we had, never beheld the site of wave after wave after wave of mallards coming in off Lake Maurepas, wondering, "How in the world could there be so many mallards in one place?"

Anyone who hunted the Maurepas Swamp, the Joyce WMA, McElroy Swamp, Blind River, Gramercy, Manchac, Madisonville, Bedico Creek, Middle Bayou,Tangipahoa River,Manchac, Amite, Tickfaw, Hahnville/Des Allemands/Labadieville/Morgan City, can tell you how unbelievably fantastic it was. Right up until the late '80s, and maybe '90 or '91. I can remember when my buddy who hunted in Gramercy called asking if I was shooting any grays, because he was tired of shooting greenheads! Imagine having that problem, eh?

I can remember mallards so thick in the peppergrass off of Reserve Canal, or in the older, tall cypress ... man! And you talk about a sight, watching them coming in to roost!!! I remember one Christmas afternoon hunt when the ducks were coming in so thick right at dark. My 10 yr. old son, in total awe, asked me, "Dad, do they ever bump into each other?" What a sight that was.

A lot of the time, it would be the trappers who let us know the the ducks had arrived. Yep, the ducks would get caught in the nutria traps. I remember how easy a hunt it was ... you could go almost anywhere in the swamp, find feathers on the water, and you were guaranteed to shoot. We'd just throw out a dozen (if that many) decoys, and along about 4:00 they'd start flying, and continue 'til dark and even later.

Another way we'd find ducks was by listening for 'em. I'll never forget my first time doing that. It was a hunt on the Joyce WMA, a foggy morning, and we had taken the big boat in as far as we could up Middle Bayou, then pirogued in for 20 minutes, to the northwest. We could hear 'em, and it sounded like they were just beyond the next line of trees. Yeah, right! After walking another 20 minutes, we finally came upon what may have been a thousand ducks, mostly mallards. As they took flight, it looked, felt and sounded like the rotor wash of a helicopter. We purposely didn't shoot 'em on the jump, so as not to "educate" them. Instead, we waited for them to return, and boy, did they return. I honestly don't know if I've had a prettier hunt, but trudging back to the boat loaded down with those butterball mallards was real work!

Well, enough reminiscing LOL! I'm just glad I was able to see it, and sad that my boys never may :-(