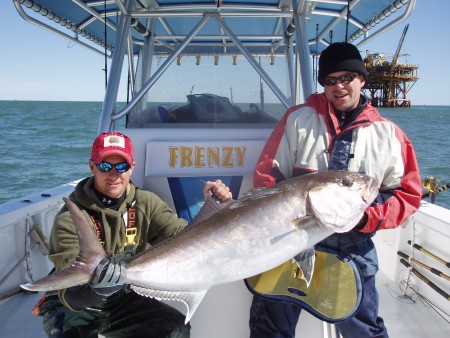 We covered all the bases this week while entertaining a large corporate group from New York and points as far away as London. This was their second consecutive February trip to Venice, and the weather cooperated nicely for us this time. Sunday evening, I got them all settled in the plush Venice Sportsman’s Lodge where Ms. Gloria put out a wonderful spread of food including stuffed chicken with seafood sauce, an assortment of desserts and such. Excitement was high as each of the anglers found out their assigned boats for the following day.

On Monday, Capt. Hunter Caballero and Capt. Bill Delabar picked up the guests at the lodge and headed out on the 32-Twin Vee’s to show them some of the spectacular rig fishing we have here. Since these guys only wanted to keep a few fish for dinner, we elected to head for the nearshore rigs to catch and release red snapper, grouper, bull redfish and croaker. The action was non-stop for hours until the customers said “take us to the dock…our arms are like spaghetti!” We did keep 14 nice lane snapper for dinner.

On the inshore scene, Capt. Jeff Fuscia and Capt. Ron Price put the customers on hundreds of redfish, playing catch-and-release for the most part and keeping only a few to add for dinner.

Capt. Chas had the fly guys who traveled all the way from London, England just to sample our skinny water redfishing. They were not disappointed, with each of them landing double-digit redfish on 8-weight fly gear along with 25-pound black drum. On their second day, Tuesday, the conditions were near perfect and Capt. Bryan Carter took advantage of them heading for the “donkeys” that prowl the edge of the Gulf. Chris and Matt doubled up on two, 22-pound reds on fly. Bryan said the guys didn’t boat a fish UNDER 16-pounds that day. Now THAT’S world class fly fishing!!

Day two of the offshore found better conditions, so we headed out to try for wahoo, amberjack and scamp. First pass on one of the rigs resulted in a screaming hookup, but unfortunately, the wahoo won that battle ending up in the rig and taking Capt. Bill’s favorite red and white lure. Next stop was the Amberjack hole, where we deployed magnum mullet and each of the guys (and gals) got to test their biceps. The largest AJ was about 60-pounds and was landed my Mike from New York although Tanya came in a close second with her 50-pounder. All the AJ’s were released in great shape after a quick photo. We made a move to look for scamp and kept coming up with big gag grouper, which unfortunately, are under closure from February 15th through March 15th so back they went. We did boat a tasty 20-pound scamp which I convinced Mike to take back to New York.

Capt.Hunter went in seach of monster Warsaw that day and the customers got to feel the brute force these giants can dish out. Later they met up with us at the nearshore rigs to play catch and release with more snapper.

Day three found most of the guests headed home, but some of them made it out for a few hours to cram in their last fix of inshore and fly fishing. Capt Ron had Dave and Sage for redfish and speckled trout action and Capt. Jeff entertained Mike and Malone with reds and flounder. Capt. Chas had Mike for a quick morning of chasing redfish in the marsh. Cloud cover and increasing winds made it a tougher day, but MIke still got a few "Cajun Bonefish" on fly before catching and afternoon flight home.

If you have a group you would like to entertain, give me a call and I will handle all the details.

Capt John L
Susan, that was a very nice post you put up there!
Reply

Reel Louisiana Adventures
Thanks JLT! Last year half the group got stranded on the tarmac during the big NY blizzard. It was nice to see them all make it to Louisiana this time. They are already planning their return in 2009!
Reply