Nothing to do with Louisiana but.... 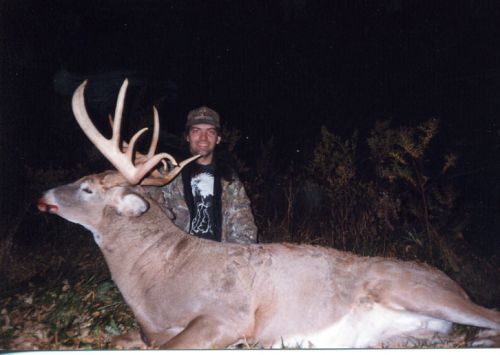 Ok this picture has absolutely nothing to do with Louisiana but it is such an awesome picture I figured I would pass it along. It isn't often you get to see a deer of this size.

NO CAMERA TRICK!
NO DEPTH PERCEPTION PROBLEM!
HE IS RIGHT NEXT TO THIS MONSTER NOT HOLDING IT UP FROM AS FAR AWAY AS POSSIBLE.

Can you guess how much this Wisconsin deer weighed? Well no one knows for sure. After field dressing it, the deer still weighed more than 300 pounds. That's right the deer bottomed out the scale to its max of 300 pounds BEFORE the deer was all the way off the ground!!! So nobody knows for sure exactly what it weighed but it is a pretty safe bet that it weighed at least 400 pounds live weight!

If that isn't amazing enough, get this... the guy that shot this deer was hunting this particular deer and passed on a 140 inch 10 point minutes before taking this monster made its appearance and fell victim to a well placed arrow from his BOW!!!
Reply

Crankbait
That deer is about equal in size to a mature bull elk weighing in between 500 - 600 lbs.

Where did that picture come from?
Reply

widgeon wacker
I don't believe it for a minute. First of all,
if that deer weighed 300 lbs., the guy in the picture would not be holding his head and neck up with one arm and looking as comfortable as he does. Sorry, but you were fooled.
Reply

Mike Guerin, Louisiana Sportsman Field Reporter
Should I post the other picture of the same buck from the front? This buck is no hoax. I know the guy via the internet that killed this deer in Wisconsin. I saw a picture of all his deer mounts from ten years ago and he had about 20 bucks bigger than any I have ever seen.

This guy lives in a great area to kill big bucks. I am sure I would kill some big bucks if I hunted their also. But this guy is something special when it comes to hunting.

Here is part of the story that I didn't tell yet. He had been watching this buck all summer. He knew where this brute liked to bed down. He was at work one day and he noticed the wind change directions. He left work early hightailed to his stand just to hunt this buck. He knew the conditions had to be a certain way for that stand to be right.

No hoax here. This buck is what is known as HUGE!

He probably got as much meat off of this one buck to match 3 nice bucks from down here.
Reply

BUCKINRUT
PLEASE POST THE FRONT VIEW OF THIS MONSTER. HE IS BIGGER THAN HOGZILLA!
Reply

Meathunter
Or you could probably get as much meat off of him as widowmaker gets all your outta the Delta...LOL...Just kidding widowmaker...
Reply

sowtrout1
I have taken several La. and Miss. deer over 200 pounds on the hoof. This deer is well over 300 live weight.
If I had killed it, there would be no mystery as to how much it weighed.
One can only dream of a buck this big. Man, that thing is HUGH.....
Reply

Crankbait
With the second angle, it's a little easier to get a real perspective of the buck's actual size. This dude has got to be pushing 400 lbs...
Reply

FreezerFiller
I would'nt have to hunt for 2 years if I killed that thing.It's definetly the biggest I ever seen [pic,mag,T.V.].
Reply