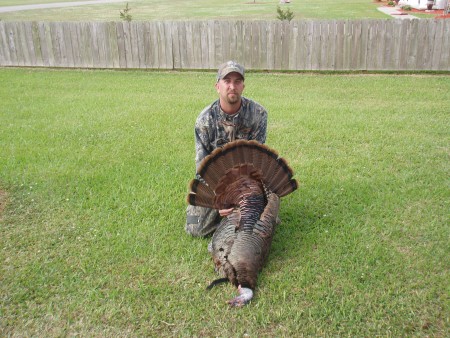 Well guys, he finally messed up! After several days in the woods and several near misses, today he fell to the old SP-10.
I have hunted this bird very hard for the entire seasonal and have had nothing but bad luck. Everthing from deer getting between us and spooking him off, jakes busting me because they ran in and he stayed back, and the worst was friends showing up at the camp to cut the grass and run him out.

This morning at 6:10 he few down and we started our long 1 hour talk and he just would not come in. Remebering what a very good turkey hunter told me, I shut up and stopped calling.15 minutes later he panic gobbled 30 yards away but it was to thick to see him. I held still and didnt answer and 5 minutes later he was standing 15 yards out and with 1 shot with the old SP-10, it was over!

He wieghed in at 21 pounds, 9 inch beard, 1 and a quater inch spurs.Time for 1 more before it closes.
Reply

sacalait101
Good job
Congrats. Those late season gobblers are the hardest to get in.
Reply

MICAH M
Bucks Only
Well Couv...if you would not have been so lasy and got out of bed...it would have been your bird and you could have measured it any way you wanted to!LOL!

Thanks to evryone else, I'm normally the caller and not the shooter so I forgot how fun it is to pull the triger every once and a while.Going in the morning to see if I can put a friend on another one.
Reply