VENICE OFFSHORE FISHING - WHAT A WEEKEND! 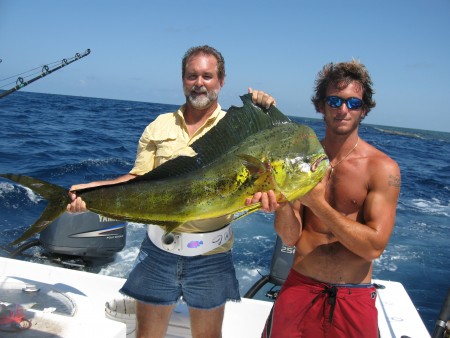 After getting our trips blown out on Friday and Saturday due to strong East winds, Capt. Bill headed out with Darryl, Maggie, Thomas and their guests to target the big ones.

After a brief huddle and decision on which direction to head first, the crew made a bait stop and loaded up with hardtails. Trolling a rip, they picked up 20 dolphin, 10 of which were in the 20 to 25# class. They continued along the rip and to their surprise, hooked up a sailfish which was quickly photographed and released.

The crew changed locations and picked up several wahoo, the largest going 50-pounds. Darryl said they missed many more as the lit up striped fish swatted at the trolling lures.

Their last stop in the afternoon was to target yellowfin tuna, so out went the FRENZY fishing kite setup with a herring dangling just below the surface. It didn't take more than a few minutes before the first live bait was inhaled and the fight was on. Thomas got the big fish honors of the day with a 95# yellowfin. The crew boated two more yellowfin and with the fish box stuffed to the max, headed back to Venice Marina.

The crew watched as Capt. Bill and mate Bobby cleaned their fish and the crew soon stacked a wheelbarrow full of gallon size Ziploc bags of filets.

Total tally for the day: 3 Yellowfin Tuna to 95-pounds, 20 Dolphin(mahi-mahi) to 25-pounds, 1 Blackfin Tuna, 3 Wahoo to 50-pounds and a Sailfish release. I'll get with Capt. Bill later this week to download some of the awesome photos he took and post them.

Darryl King, who has fished all over the world or private and charter vessels, said it was without question the BEST single day of charter fishing he has ever experienced.

The action will only continue to heat up from here on out through the summer. If you haven't sceduled your date yet, you had better do so quickly. June is just about full, July has some weekdays open and August has a few weekends and a bunch of good weekdays at this time.

catfish369
I want to see some photos!
Reply

Reel Louisiana Adventures
Sorry the photos were a little slow...ENJOY!!

catfish369
I truely enjoy the offshore photos...one day I'll get out there, maybe in 2 years...maybe next year.
Reply

Couillon
Daisy Duke called. She wants her shorts back.
Reply

How about more pics of Susan ?
Reply