Incredible, The trip of a lifetime 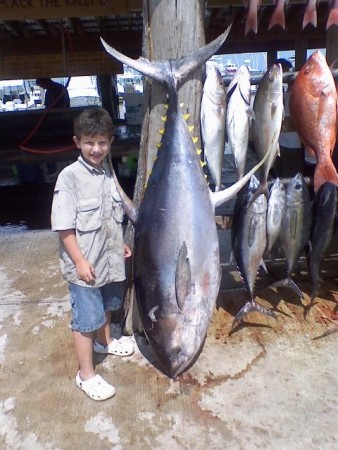 I got a chance this past Friday to fill some spots on Captain Gray Long’s boat with Go Long Charter’s. It was incredible to say the least. We left Venice marina around 9pm on Friday and rode way out. When we arrived at the first spot, around 3am, it wasn’t long before the Captain had us right on top of the fish. We hooked a few good sized blackfin tuna for the icebox and I hooked into something that just punished my arms for about 35 minutes before the leader broke. After a few more passes we headed to the second spot and there was tuna everywhere. We hooked a few more and the Captain put out some setups to catch yellowfin tuna. We hooked two back to back in the 40-50lb range and then we hooked it’s momma! I fought the fish for about 15 minutes and I had to tap out to my Dad. He fought it for about 10 more minutes and got it to the side of the boat. When everyone initially saw the fish we all thought it was a shark. Upon a second inspection it was a GIANT yellowfin! Captain Long gaffed that sucker and when I tell you that fish was mad it was P.O.’d like I’ve never seen. I honestly thought it was going to take the Captain overboard. It did take the gaff and shot straight down. Dad fought that fish for about another 35 minutes and got it back to the side. Luckily we had another gaff, which it almost bent straight, but it took four grown men to get the 198lb yellowfin tuna in the boat. After landing a fish of a life time and almost having no room for anymore fish in the box we headed in for some snapper action. We found the AJ’s first and then a few red hogs a little deeper. My 8yo nephew was along for the ride, mostly, but I would like to especially commend the Captain for making a few extra special trips so he could get my big buddy on some fish a little more his size, but that would still put a hurtin’ on his arms. Before the trip was over and the fish box was CHALK FULL my nephew exclaimed “This is the best day of my entire life!” I would have to agree, and it was absolutely incredible! If you’re looking for an excellent charter to catch some fish this guy knows what the heck he’s doing. Captain Gray Long has an immaculate 31’ foot Cabo with two 300’s that slices thru even heavy chop with ease and has a sound system that kicks @ss. I know one thing I’ll be going again and SOON! If you want to go catch some fish and lookin to put a good hurtin’ your arms, you GOTTA give this guy a call 225-252-5315.

And to you Captain Long, if ya happen to see this, Thank you so very much. You and your crew were absolutely fantastic!

Big Country BR
Unfortunately he does not, but he has a couple of post's on here of a past trip or two.
Reply

gatorbait1
Nice fish Big Country, glad to hear all had a good time. Next time, let me know plenty ahead of time and I'll try and make the trip, X.
Reply

Big Country BR
We'll be going again real soon but i have to left my arms heal first and then work out a little, cuz after a few of those blackfin and one that got away I felt like I had the strength of a 12yo girl... My muscles are still hurting, but I can;t ever remeber when i've had a work out like that and still had a smile on my face for three days afterwards.
Reply