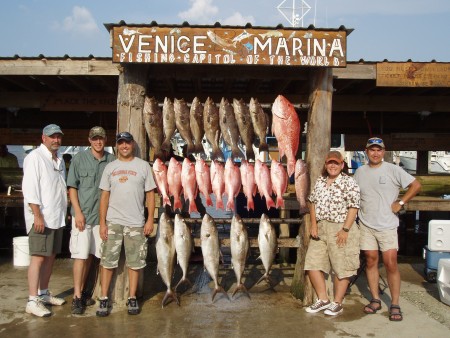 Last week was a busy one for the offshore fleet. The yellowfin tuna fishing has been on fire with an average of six good yellowfin per trip.

Capt. Bill had a couple of fly-guys on board on the 15th and they worked the rips, weedlines and Lump for little tunny, dolphin, snapper and more. The guys were in search of a big bull dolphin on fly, but that didn't happen. They're already looking forward to a repeat assault.

On Friday, it was a full slate of boats out. Cory Summers and crew had four yellowfin tuna and limits of snapper with Capt. Hunter on the 32-Twin Vee.

Mike Sams had a two boat bachelor part with Capt. Troy and Capt. Josh doing the entertaining. The tuna eluded them, but they had nice catches of snapper, amberjack and Troy's boat landed a bunch of really nice scamp group - YUM!

Capt. Bill had the USM-Gulf Coast Research Lab crew for snother shark tagging excursion. They found the sharks they were looking for an deployed several satellite tags. This crew also went in seach of whale sharks with the help of a spotter plane, but found none on Friday. They also "accidentally" boated a 130-pound yellowfin, which they graciously shared with others at the dock....Thanks guys!

On Saturday, Capt. James had Travis Leiva and crew on his 32-Twin Vee. I didn't get a report from them, but they were in the right spot and hopefully did well.

Capt. Kevin on the 30-Gravois "Pale Horse" garnered outstanding catch of the day with 10 big yellowfin tuna for Chris Green and the Mississippi crew on Saturday, July 19th. They also picked up their limits of nice red snapper and crammed them in the already stuffed fish box before calling it a day. Chris was so excited when he spoke to me as he and his girlfriend were grilling tuna steaks the next day. He said he is ready to set up a permanent camp in Venice!

On Sunday, Capt, Hunter had Cliff Carr and family. Cliff said Hunter put them on so many big tuna, they cried "uncle" -- especially when they had to fight an release a big blue marlin. The marlin broke the rod about two feet above the reel, so they had to "handline" the monster in while another reeled like crazy to keep up with the beast. Cliff will be sending some photos soon, which I will post soon.

The Faux Pas Rodeo takes place this Thursday-Sunday at Venice Marina. This should be hopping with over 200 boats registered to participate.

catfish369
What was the weight of the snapper?
Reply