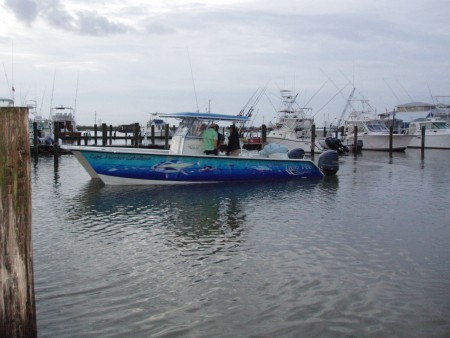 During the annual "Marsh Madness" event held in Venice last week, I got the chance to take a trip on Capt. Hunter's new blazing fast 32-Twin Vee rigged out with two YAMAHA 350hp four stroke engines.

Although the seas were pretty rough, this was their only chance and they voted to make a run for it. This new style hull outfitted with twin 350hp YAMAHA's is SUPER FAST and got them down the River to South Pass in 22 minutes!

After boatingf a few dolphin and a lone blackfin tuna, Koby got the big fish of the day and ended up winning the largest tuna prize at Marsh Madness for his 88-pound Yellowfin.

If you are ready to get out on the water and tangle with some yellowfin and blackfin tuna and speedy wahoo, just give me a call and I'll schedule you aboard one of the 32-foot Twin Vees or aboard a 34-Contender, all of which are operated by the TOP captains in Venice and are FAST, COMFORTABLE boats.

There are some GREAT DATES still available in October, which is a fantastic time to target these species.