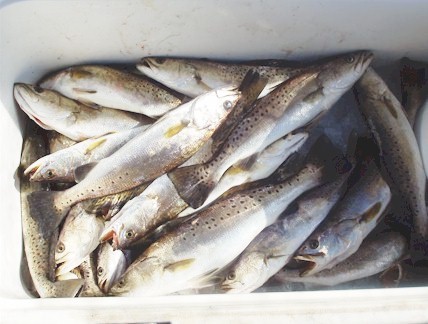 Today I left out of Pip’s Place and headed to Delacroix to fish The Four Horsemen’s Lake. The tide was just about flat but the weather was very nice with decent water clarity in that area. It didn’t take long before I was on a good trout bite under dive-bombing seagulls and fish were coming aboard with mixed throw-backs. I almost limited out right there, but after throwing back a bunch of fish, I was short of the limit; so I headed back toward Hopedale and toward Lake Robin’s Nest. But in route down a certain canal, I came across more dive-bombing birds but this time the fish were very nice sized. Fishing 3 inch Berkley Gulps in New Penny and 1/8 oz screw jig heads under a clicking cork, the trout were obliging once again. The trick here, which I feel a bit guilty to divulge, is using the rotation method with the Gulps. Here’s how it works- but don’t tell anyone but report back to me to let me know if I was jerking you around- use two rod and reels rigged same way as aforementioned. Cast one Gulp out and let the other Gulp soak in the Alive juice until you catch a fish. Repeat the method by always having one Gulp freshly soaked in the Alive juice ready to go as you alternate rod and reels with each fish caught. Make no mistake about it, these baits work best when freshly soaked in the Alive juice. The more they stay in the water being fished, the weaker the Alive scent becomes.