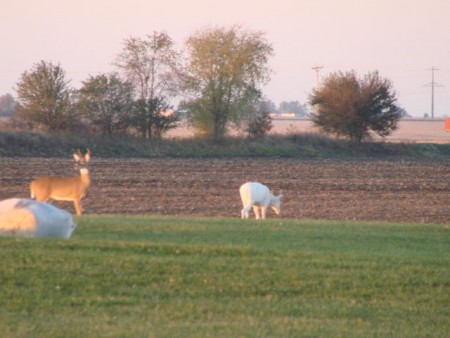 A Friend of mine took these pictures in Illinois yesterday morning. There's been several sightings of albino deer up there lately.
Reply

huntin dad
NICE!!!!
i would love to encounter one of those i wouldnt even have to harvest it to get enjoyment out of it.
Reply

jccnash
Minnesota
Where I hunt in Minnesota, there was an albino 8 pt buck that had been seen by alot of hunters. It was like a honor deal that no one would shoot it. Several guys had the buck within 20 yds and decided to let it walk. One day this wiseguy decided to pop a shot off at it and killed it. Word got around as to who killed it and things really went south from there. Threatening phone calls, people wanting to whip his rear end,and they even put signs up in the mans yard with big red letters saying: I KILLED THE ALBINO BUCK AND I'M PROUD OF IT!

Needless to say the man moved to another town...

If you are that hungry call me and I'll give you some deer meat. Let it walk.

bassaholic
deer
He's not an albino, he just has his snowflage suit on.
Reply

Another good bass trip
Raging tide
Day 2 was good...
Last day of hiding from the wind
Had to hide again