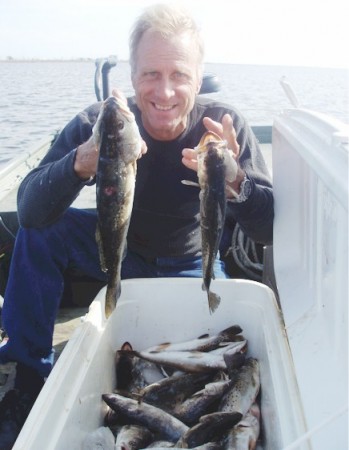 While most people gathered round the table passing turkey and cranberry sauce, Dale and I were gathered round our favorite fishing spot passing the landing net, pulling fat speckled trout aboard. Today the winds were calm and the trout were very restless. No one should be bragging about catching limits of trout this time of year in Hopedale. Our first spot started out slowly, but it picked up after I figuring out I was in the wrong place. Anyway, trout were coming aboard one after the other on 3 inch New Penny Gulps and 1/8 oz. screw jigs heads fished under balsawood clicking corks. NOTE: I make these because the Styrofoam ones silence the clicking sound after several trips of use due to the insert at the bottom becoming pounded down. I know those who use these type corks don’t know what in the world I’m talking about. RIGHT!!! (see http://www.jerrylabella.com/fishing_corks.htm ) Anyway, I hope for Christmas fewer boats will be out. We were back at the launch at 10:30 am limited out, but I could have been back sooner if we really tried. Tide was falling all morning with an almost 2 ft. differential. Water was very clean. One Pint of Fuel Lake was very hot but so was Grand Slam lagoon. We saw more than the usual boats today but it appeared everyone was doing well on their catch.