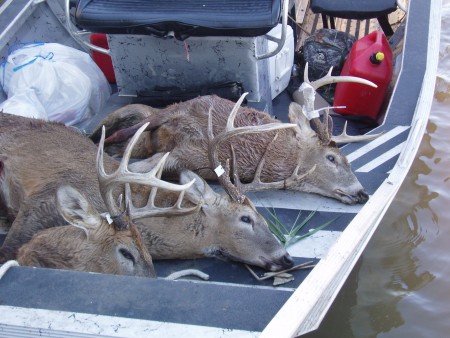 Well guys....it was another good hunt down in the marsh this weeken! Saturday mourning , a bow hunter took a nice 10 point. That just started it up. After seeing many deer and NOT SHOOTING the young ones, Sunday mourning was the day! It started about 7:20 when a nice older 8 point came out and Colby made a great 419 yard shot on the deer and dropped him like a bad habit.Shortly after a real nice 9 point came out on the other side of the marsh at about 300 yards and then bang...hunt over! Gotta love it! 2 hunts in one week and 6 wall hangers!
Reply

1bigdeer
wow
how many small bucks yall passing up
Reply

tuffhuntin
weight
what's the weight on those. that's some nice ones
Reply

MICAH M
Shoot them by age!
We saw around 20 bucks in a weekend that we let walk. We shoot 4 1/2 year old deer, at least we try to. Sometimes you have people that just dont lay off the trigger.Sometimes they are just hard to judge the age because they are in the marsh and not solid ground. The average weight is 180 to 200 pounds.
Reply

Brennan B
Marsh
Where do you guys hunt at in the marsh? Are you anywhere near Belle Isle Island or are you down the Atchafalaya Delta?
Reply

MICAH M
Brennan
We are down by the delta.
Reply

Iron Mace
Age matters
You have to let them get to 3.5 to 4.5 before you see the results. Good Job and awesome deer!
Reply

turd burd
hey
how do i get to hunt there?
Reply

lil brudda
Scarab
When are you going to take Kenny H. and Blain R. down there? Looking forward to seeing you at Bridgeside this year.
Reply

MICAH M
KENNY!!!!
Cant take Kenny on a boat!!!We wont make it out of the boat launch! LOL...Cant wait to see yall down there, time to start fishing, I need a little blue water in my life.
Reply

Guy L
Congrats
Congratulations on fine deer. I would never guess that the marsh would hold such fine deer. Are you guys finding them along levees or in the middle of the marsh? Judging by the 300-400 yard shots, I am guessing they are deep in the marsh. By the way, how exactly do you guys get high enough in the marsh to get 400 yard shots??? Seem like tripods would sink!!! I have had a lease in Vermilion parish marsh for 6 years and taken some small deer, but haven't seen any signs of deer that big.
Reply

MICAH M
Guy L
We only shoot 4 1/2 year old deer and they grow big. We dont feed are anything like that, its just simpley letting the deer get old enough! I started managing the herd 3 seasons ago and this by for has been the best season ever and it will only get better as we go.When I started this , we would kill 1 or 2 decent deer a year and so for this year we have taken 7 wall hangers and let several more walk.Its great to sit in a stand in LA and see 20 deer a hunt.
We use 15 foot plastic box stands and use old deck boards off of the crew boats to put the legs on so they dont sink.

1bigdeer
ed
how many deer were yall seeing when yall first started managing yall land? how many does yall shoot
Reply

my 1st dog
delta???
i thought that it was bow huning only i know thats how it is in pasalutra
Reply

1bigdeer
kajun
you are the man with all the answers
Reply

turd burd
cool guy
i wish i could kill deer like kajun. he is a tru trophy hunter!!! LOL
Reply

turd burd
no sh#t
im not talking sh*t. i just wish i could go hunting with you in the places you hunt. you seem to be a real outdoorsman
Reply

1bigdeer
kajun
not everyone is privelaged like you and can go hunting in places that are full of deer, you act like a bad a$$ because you let deer walk.
Reply

turd burd
1bigdeer
i totally agree with you. i'm not all about trophy hunting in the marsh. if its brown its down. i think i might rather go hunting with the WIDOWMAKER. he seems like a lot cooler fella to hang out with around the delta area.
Reply

MICAH M
1bigdeer
When i started this, we would see about the same amount of deer, maybe alittle less but we started shooting 25 does a year and 10 bucks only. We saw good results the next season and it has only gotten better. Now we are up to 30 does and 12 bucks and I think I might need to kill more does this year.
Reply

meathunter23
private land
That's the main reason I hunt my own land. I have 86 acres I hunt on, and dont have to have anyone acting like you're an idiot or something when you shoot a spike or a basket rack. But you know I'm not interested in filling my walls up with deer heads, I'd rather eat the deer and to me the smaller one taste alot better. SPIKES ARE MY FAVORITE!!!!
Reply

1bigdeer
kajun killa
everyone knows that small bucks become bigger bucks! that an easy concept!!! if you hunted a place where you see one deer a hunt if your lucky, you wouldnt act the same

longbeard2
Marsh Deer
It seems to me that everybody wants to kill a big buck, but not too many people want to let the little ones walk. If you want to hunt and shoot whatever, that is fine. But it doesn't make sense to rundown someone who makes an effort to manage his or her deer herd to shoot bigger bucks. All it really takes to grow bigger deer is time and self discipline. You don't have to spend a fortune on supplemental feeding, high fences, etc.

Will Hunt For Food
.
Killa ur such a bullie!
Reply

1bigdeer
what?
you act like you are the only guy that doesnt shoot little bucks! its pretty common for people to pass small bucks.

your not as advanced as you are thinking
Reply

WetlandCreature
Kajun
Kajun, I agree with you 110%
Reply

MICAH M
LB2
Very well said LB2.The way I see it, its very simple. I have been on both sides of the fence, I use to use the brown its down method but it took 1 good deer in 2001 to open my eyes and make me want to start shooting good deer.
In this state a hunter can shoot 3 bucks and 3 does...no size restrictions.I have no problem with anyone shooting any LEGAL deer,its the hunters that think that they have to shoot every deer they see thats gets me.
I have been blessed in the fact that my boss owns this land and allows me to manage it and now I can do what I want and it is a blast to sit in a stand and see a bunch of deer in a hunt and let even good bucks walk.
I know not everyone has this kind of deal but all Im saying is that deer managment can be sucessful anywhere as long as you want it to, even in the marsh!
At the end of the day its up to the hunter to make that decision on what he are she wants to take...I want both!Horns and meat, why choose one over the other?If you just want the meat, in my opinion, shoot a doe!
I hope everone has a great deer season and kills what they want...Happy hunting!
Reply

The Lone Grey Wolf
douch bag kid
Kajunkilla,your a real douch bag,and you show it everytime you post.What a loser!Micah M i had much respect for you and what you are doing in the marsh but,i lost it all when i realized that kajunkill was the type of people you surround yourself with.Do yourself a favor and tell that kid to shut his big mouth.He really makes you all look bad as a whole.
Reply

How many acres are yall leasing?

And what type of land is it? Is it hard sand with brush/myrtles/willows or is it more marshy (fly grass, cut grass,canes, less sandy and more muddy)?
Reply

MICAH M
Land
Jason,my boss owns the land, its about 2700 acres and it a combo of canes and float with alittle cutgrass.

Grey Wolf- Kajun and is brother are allowed to hunt each a bow stand on the Island but they dont hunt out of my camp.Its a favor deal with my boss and someone else. I know his brother well but not him, he seems to be a good guy to me, I just hate the name calling BS.Its not why I posted the deer pics,Im just alittle proud of what we have done out there and want to show other people that IF THEY WANTED to, they could do the same with out to much effort,just alittle time to educate yourself on deer managment.Age is the key!Let them grow if you want to and this is what you get!
Reply

Elmers
False river report
Wind, Wind, Wind...Go Away!!!
High Winds made for a Slower Bite
Trout Bite, Good as it Gets!