Big ones from Tensas 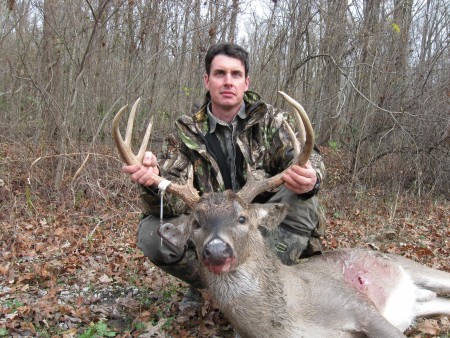 Ok guys the big ones from Tensas. Both where taken Saturday morning on the 12-13-2008. First one is a nine pointer with inside spread of 19 ¾ inches and 219 lbs. The second one is an eleven pointer with inside spread of 18 7/8 inches and 195 lbs. They where checked at Crystal checkpoint. The guy who killed the nine was part of the group I was hunting with. Con-grats Ashley fine deer. The eleven was taken by my nephew who was hunting with his dad and brothers. Con-grats Luke fine deer. Oh, guess everyone is wandering about the monster in the last picture. That one is mine. Scouted all season for that one. Had an impressive 4 ¼ inch inside spread. Good luck to all for the rest of the season and stay safe.
Reply

FunGi73
awesome!
Were these deer taken on public land?
Reply

bonjody
Shoulda, woulda, coulda!
Way to go Ash. Congrats to Luke also. I'm going with you guys next year. Maybe I can get Brian to help me drag one out next year!
Reply

hunt r
kimike
hunted tensas first year open. left for other areas in 95. have heard conflicting reports on reasons for deer decline.look at these pics looks like thickets have grown into big trees. not good for deer.just my .02.
Reply

Sheaux Time
ok guys
well i was gonna post about luke higgenbathums buck but looks like someone beat me to it i was hunting this weekend as well as i work with luke's brother mike higgenbathum for medline pharmacuetical well all week at work he was tellin me we leavin for tensas thurs night we leavin thurs night i cant wait !! lol well friday morning i get a call from a phone number on my blackberry that i have never seen before and the message says " hey paul this is mike this is my dads phone some reason mine wont go through but oh man my brother shot a man i mean a real big one.. two minutes later i get a picture mail and i was impressed nice deer luke and mike calm down son the rut aint even on yet when it gets good early january then get pumped nice deer luke u aught to be proud especially on public land
Reply

Gary Fishaholic
Wow
Now thats full size deer way to go guys. Maybe one day I will see one like that to get a shot at. Thanks for posting and the pic's.
Reply

ashhunt911
What a fun hunt this was
All 3 deer were checked in at the Crystal check station on the southern part of Tensas.
Reply

huntert
For your information
I have to agree with you on the thicket situation. I have been hunt in tensas for 15 years. I am able to work the special youth hunts in the back of the refuge center with the game warden each year. Last year, Tensas was able to hire a person that is now select cutting trees throughout the refuge. This will help the deer with feed and cover. I only bow hunt and for the last past 4-5 years, I average seeing about 100 deer per year on the refuge. This place has plenty of deer, but the area needs more cover to protect the big deer.
Reply

ahlangle
seriously?
Why would you shoot a spike like that?
Reply

hunt r
kimike
huntert thats great,however i own land 5 miles away and i see 100 bucks a year.
Reply

Bowtech1111
might know him
does ashley have a brother named jody.
Reply

stumphunter
Tensas bucks
Ashley does have a brother named Jody.

As for as why take a spike, because I can and the next hunter down the line would have done the same. Its a management hunt so I did my part.
Reply

kajunkilla
Management
What are you managing for shooting a spike?
Reply

Capn Crunch
Geeeeez-us!
The man said he killed it because he can. Every year it's the same crap.
Thats the same as asking why do you drive the truck you drive.
PRO CHOICE, hehe :)
Reply

kajunkilla
MANAGEMENT????
I JUST WANT TO KNOW WHAT MANAGEMENT STYLE HE IS USING BY SHOOTING THAT SPIKE, IS IT NEW OR SOMETHING I HAVENT HEARD ABOUT YET????? VERY CURIOUS!
Reply

kajunkilla
MANAGEMENT????
I JUST WANT TO KNOW WHAT MANAGEMENT STYLE HE IS USING BY SHOOTING THAT SPIKE, IS IT NEW OR SOMETHING I HAVENT HEARD ABOUT YET????? VERY CURIOUS!
Reply

huntert
Kimike
Do you have land around the Tensas area? I was agreeing with you on the woods needing to be thicker. When I first started hunting that area, it was nothing to see probally 200-300 deer a year, Not many hunters were around. The gun hunts were killing that many each day. I would love to see them cut back on the gun hunts to try to populate the deer heard. There are some big deer in that area, just not like it was years ago. I am sure by talking to Mrs. Kelly, the heard will get back, but it will take some time. The refuge manager thay had a few years ago, was only worried about the black bear population. If you have hunted aroung Mclamore area, you know what I am talking about.
Reply

Lamplighter
Right and Wrong
I read yall's back & forth opinions. I agree that it is every man's decision to shoot a spike or not. No criticism should be voiced over that, HOWEVER, I did see an absolute statement inthis thread in that one of yall said if I don't shoot it, the hunter down the line will. THAT is pure BS and a poor excuse. If you need some meat and don't have a lot of time in the woods, take it. If you are stocked up on meat, let it go so it will be something bigger next year. Last year On Tensas NWR 2nd lottery hunt, in the Tendal section, I let an 8 point walk. True statement. It was not big, I killed an identicial 8 point the day before with my bow, and killed a doe on the Thanksgiving Big Lake hunt, so I did not need that little 8, and did not have to show up at camp with "a deer." You have to rise above that peer pressure if you intend to keep on hunting at Tensas. That other fellow who said he blasts everything, button bucks etc., he does not belong hunting. That is the type who throws all those beer cartons on the Crystal road. Trash people. He will be the demise of hunting. Yall take what yall need, and rise above that "need" to show up at camp with a deer if you are already meat stocked up, and the deer is a young one. Lord knows how many does I let go that have one or two small 80 lb. yearlings with them. I am always letting them go regulary up there.
Reply

Young Blood45
Funny
You know whats funny about you guys is the fact that there is no spike in those pictures.... all i see if a flippin moose an elk and a unicorn. Just my .02$ on this post. Also he has the unicorn dressed like hes going to mount it.

shootinem
re
It's not against the law to kill spikes people!!!!
Reply

HUNT WITH HOUNDS
knockem Down
Congrats on all three kills.I'm so tired of all this crap when someone kills a non "trophy"(spike,3pt.,4pt.,etc.)deer,someone has to put down on them.If your not paying for the persons lease,bullets,gas,etc.,it's not any of your dam business what they kill.Also Mr. Lamplight you keep letting them walk & I'll keep shooting them.
Reply

Lamplighter
Reply
No you won't keep shooting them because chances are you only hunt 2 lotto days and 2 out of 4 mzl days. I seriously doubt you are one of the hard core bowhunters that frequent that area in January. I guess your motto is " if it is brown it is down."
Reply

deerslayerinhd
Hmmmm
When are they going to open bear season? Because that seems to be the only thing they are managing. My .02
Reply

ttboy201
Killen
Lamplighter, I was the guy down the line from him and I would have shot that unicorn. Anyone who says that does not happen on management areas is an idiot. Question for Ashhunt911, What else happened on the hunt? And as far as the unicorn, SHOOT THEM ALL.
Reply

am 1248 for sale
Getting close for the spring!!
Review of Dexter Russell 7 in Fillet Knife
Gravely Zero Turn
Automotive ads