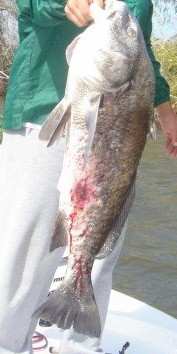 This picture shows what issues I have with bowfishing. I caught this big drum on rod and reel and it was fatigued while fighting, very unhealthy and started bleeding out of a hole in his side when I took him out of the water. I dont know where, how, when, or why this fish had a hole in his side but one could assume it was due to an arrow. I caught the fish near a duck camp that has lights on the pier. If you are going to shoot a fish with a bow and arrow make sure you shoot one that you are going to eat and not throw back... it was sad to see such a big unhealthy fish...
Reply

The Sportsman
Hole
yes the hole went all the way through. I put the better looking side to the front for the pic.
Reply

catfish369
Bow fishing is good, just bad people!
Just like in Bow Fishing, fishing also has bad people. I'm not a bow fisherman but I do know if we keep on giving P.E.T.A. and the other gay groups a reason to shut us down they will, so stop fussing and pick up a bow and a fishing rod and have a blast and don't sit here and criticize one another. Just giving the pains fuel to hate us more. ALSO a bird can do the same thing....Cormorants! So stop hating and start praising. My 2 cents.
Reply

Milton
in defense of bowfishing
You have to participate in the sport to understand it. You do not always retrieve every fish that is shot. Sometimes they pull off. When a person goes fishing and hooks a small fish in the gills, whether they realize it or knot, that fish is dead, even if they release it. They have killed a fish the same as the bowfisher when the fish is hit and pulls out. It is just a size difference. Most bow fisherman do not release fish back after being shot. I go fishing from time to time and have never released a fish. As a matter of fact, we have never exceed our limit on redfish & drum. If we go out and shoot 5 redfish per person in a night, we had a great trip. What you caught was a fish that pulled off the arrow.
Reply

lanco1
Always a few dosgris
When bow fishing you ussually have a good view of the target so things like this don't happen. Pull outs can occur though, but in my experience are ussually associated with low belly hits. I would think this would be an exceptional case and not the average night of bow fishing. I certainly would not have shot a drum that big intentionally and if I did it accidentally I would have brought it home and tried to do something with it.
Reply

The Sportsman
Problem
I dont have a problem with responsible bowfishing... I could care-a-less about redfish, garfish, or carp... shoot all you want. They are not my target species. I will admit, redfish can save a trip from time to time but I would rather eat bass or specks over reds... anyway, the problem I have with it and the reason I posted is because this is a fish that has survived many many years and now is struggling for survival due to someone shooting at it. I would rather the person be a good shot and kill the thing rather than wounding it. I would be the first to congratulate him/her and say nice shot.. what a fish..
I dont have a problem with people who understand fishing going bowfishing. They understand limits, size, etc. However, I do have a problem with people who are out there to shoot at fish just to do it. I know several young guns that like to go to shoot at fish and they have no clue what they are doing. They dont even like to eat fish!!!!! That is what I have a problem with..
My post was not bashing bowhunting or the people that do it.. just to show what happens if it is not done right.
Reply

doorman78
what about outboards
what about fish hit by outboards? or deer with old wounds from bow hunting? I caught many fidh with previous broken back injuries.And shot deer with old "bad shot"wounds.I bowfish and sometimes the line gets caught on something and pops.the arrow may hit the target and go all the way through when the string has popped. sometimes the tip doesnt open up and the fish gets off.it happens more than you would think.so many so quick to judge and not think of the other possibilities. of course theres people that werent raised by real men and their ethics in the outdoors and and in life show it,but try to keep an somewhat open mind of the possibilities.my 2 cents.
Reply

The Sportsman
re
never said outlaw it... geesh!!!! thats the problem with posting from a computer... some people just dont understand what you are trying to get across... I agree with you.. However, if you are going to shoot at a deer or fish, practice before you ever take a shot to avoid bad shots.
Reply

trout assassin
Not that easy
I get what your saying but it ain't that simple. Every once in a while a fish pulls out. It happens. BEing a good shot is what you desire but u gotta realize, light refraction, water depth, light, size and your moving as is the fish so you can't just hit the fish where you want. I wouldn't shoot that fish, or keep it from a rodnreel but some may and the thing could come off. It may have been negligence but it may have been an accident. U hook a fish in the throat and let him go or he breaks your line. He probably dies. Same concept. Happens in all sports. Its sad but it happens. Shoot at a duck and wing him and he is gonna die. Its part of the act.

Again i hate that it happens but things ain't perfect..
Reply

Mike Guerin, Louisiana Sportsman Field Reporter
.
Could have been made by a gaff. Just saying a hole doesn't guarantee it was made by a bow. And like has been mentioned already, hooks kill their fair share of fish.
Reply

Maybe a rival fish gang did a drive by on him.

No seriously , I see your point on responsible bowfishing but on the other hand I know personally a guy who caught his limit on reds and a few specks on rod a reel and let them go to waste in his cooler, he didnt feel like cleaning them. I havent taken him fishing since.

Its definantly the person not the technique.
Reply

The Sportsman
true
The debate was brought up, I had some pics that I thought were relevant to the debate so I posted them. If I could have posted them under the debate thread I would have. I just wanted to show some people what can happen... Everyone has made good points on the debate and everyone is entitled to their own opinion.. I am neutral on the issue. I like to catch fish on rod n reel and prefer to shoot deer with a bow. thats just my opinion.
Reply

Deadly with a bow
Flingin' arrows
Well I'll begin by saying I am an avid hunter, fisherman, and bowfisher. I respect the outdoors and wildlife just as much as the next guy. However with all sports, outdoors and not, you can't guarantee that perfect shot, perfect hook set, perfect throw,swing or whatever. There are simply too many variables involved. With the exception of occasionally finding clear water in the marsh I shoot majority "trash fish", if you will. There are no limits on these fish such as carp and gar and they often times contend with game fish for food etc. Gator gar especially can put a hurt on fish populations. So whatever views you have on bowfishing I hope you understand that rather than raise hell via internet or on the water, consider that the majority of the boats you see bowfishing are full of outdoorsman just like yourself that found yet another good reason to get in the boat and hit the water. PS. Don't knock it till you try it. It's rather addicting.
Reply

spillway hunter
for bowfishing
that arrow pulled out of that fish, it happens rarely and can't be avoided that easily. same for a deep hook in a small speck or red they may or may not die
Reply

Dr. Spot
may be infection
I'm not convinced this was from bowfishing. In the winter, reds and drum get cold, don't move much, sit in the mud, and get infections, possibly from leeches. When you catch them, they don't look healthy, and probably are not....some of these may not have survived.

I caught a red with a couple of red spots like this in Bay Eloi, no bowfishing there.

I'm not saying its not bowfishing, but there are other possibilities.
Reply

TP
Quick question
How many 11 inch trout have had their guts ripped out pulling a "HOOK" out and then been returned to the water to succumb to a certain death?

YeaURight
Dead fish to be
Could also be from a pirahna or killer whale bite. Don't rule out native indians using blow guns either!
Reply

D-u-c-k
fish
you say you like catching trout much more. What about people who still use treble hooks when fishing with shrimp, because i guarantee you a lot more undersized trout die from removal of treble hooks then there are fish swimming around with wounds that are actually from bowfishing
Reply

The Sportsman
fish
infection.. fish was caught during one of the first cool fronts of 2007 around the end of September or beginning of October.

Since the topic was brought up I decided to post some info from one of my other posts a while back....