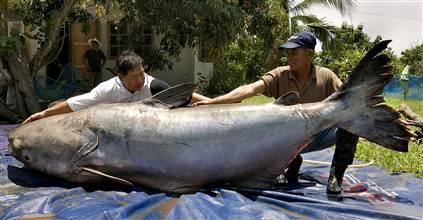 646 pound catfish caught down in Dularge!!!

This a photograph of a 646 pound Mekong Catfish caught in Thailand and examined by some researchers who are trying to document and study some of the larger and also endangered freshwater fish. Not surprisingly, this brute also set the record for the world's largest freshwater fish. It also makes those 40 and 50 pound monsters that I sometime catch seem pretty puny.

I did not post a link to the article but it can be found on MSNBC's website as well as National Geographic's.

canter
Let's see how much of the meat makes it to rhe US freezer shelves.
Reply

There are document cases of fish in excess of 1500 pounds having been caught.

Take a look at this one!
http://www.riverpirate.com/sturgeon_fishing.asp
Scroll down to see the big one!

Here is another behemoth!
http://forums.fishontario.com/servlet/JiveServlet/download/1-11134-65243-2145/Sturgeon.jpg
Reply

Just an FYI - the reason that sturgeon are not counted is because while some individuals may be landlocked, the largest sturgeon species are not considered a true freshwater fish, as they are known for spending a good portion of their time in saltwater.
Reply

Madmardigan
Wow! Such a big fish. You are awesome guys.