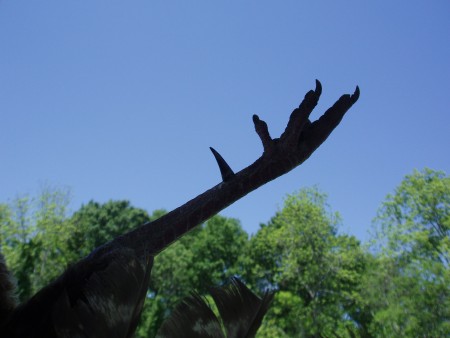 Well fellas, after 3 years, several chose calls, and 19 days this season, the GHOST is dead!

Just one week after I killed his 3 year old buddy, the GHOST made his last mistake.

I have a very long history with the Ghost, he has made me loose alot of sleep in the past few seasons but tonight I can rest easy.

This morning he started on the limb real early and gobbled till 6:45 when he flew down.He gobbled a few times as he moved toward the back of the camp as has done time and time again.I waited till he was behind the camp and then I made my move to his sweet spot.
At 7:30 he started back my way so I gave him a few purrs to let him know where I was and then left him alone.
He got about 80 yards out and gobbled his head off but would not come in to the spot where I killed his buddy last week so I fought the urge to call at him and let him forget about the hen he heard and walk off.
At 8:20 he gobbled behind the camp again so I made my move of 60 yards and got in place for the long wait.
At 8:45 I called to him one more time and he gobbled his head off again and would not move so I did not call again knowing with in the hour he would come looking!
At 9:45, like clock work, with out saying a word, he came in at 25 yards straight to me looking for that hen.
With one shot from the SP-10, the 3 year chase was over and so was my season!
He had a 10.5 inch beard and 1 1/4 and 1 3/8 inch spurs!My best one yet!
It was a great season, hope everyones was as good as mine!

citslick 1
MICAH M
How old do you think the "ghost" is? Just wondering what the life span of a gobbler is.
Reply

longbeard2
Ghost
That is a great turkey. Congratulations. It is sometimes hard for people to maintain discipline by not calling, but it often pays off in a big way, especially on an old one like that. I killed one with 1 3/8 inch spurs once; they are hard to come by. You should be proud. Hope you get him mounted.

L B 2 , Im very proud of him! Cant wait till next year! Going in the morning with a good friend, going learn. I always want to learn more. Every hunt I learn something new.

longbeard2
Learning
The beauty of it is that you always learn something new, and although you become more proficient as a hunter with experience, you will probably still sometimes call too much, get too close, spook turkeys, miss, do stupid things that you know you shouldn't have done, etc. Good luck. He is truly a fine one.

gobblercrazy
longbeard 2
longbeard 2 that is so true heck ive done all of those this season...LOL but still have taken 2 fine birds and had one heck of a season seen birds on all but 2 outings this year....one morning hunt in kisatchie we didnt see or hear a thing and the last morn in FLA we didnt see but we did hear birds that morn......
Reply

SpeckBound
SpeckBound
That is the MAN. Great bird!! Killed my 1st bird monday. What a rush !!
Reply

lancet
no more ghost
yea u right the chase is over congrats. i got 1 left to get mayb ill get him the weekend
Reply

MICAH M
Thanks
Thanks for all the comments ! I did go this morning with a good freind, I'll post the pics tonight! Great hunt!
Reply

gunrunner
Ghost
That's one hell of a bird! Great story. Now what are you gonna do next year????
Reply