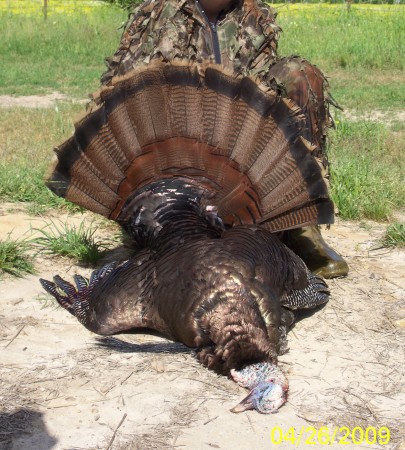 They finally started gobbling on the place saturday evening. One gobbled 15 times. We started off sunday morning about 50 yards from him with a couple of decoys in the field. I called a little and he would answer, but I couldn't see him on the limb. I did see him when he pitched out in the opposite direction. He was streching the distance between us quick, gobbling every so often. We decided it was time to leave the decoys and catch up to him. When we got to the back field he gobbled and we knew where he was, so we made a big loop around and come in from the direction he was heading. By the time we got 15 yards from field he was in it was clear there were three birds. They were gobbling their heads off. They gobbled at everything. In 21 years of hunting i've never heard birds gobble this much. The gobbler that brought us there ended up gobbling out of hearding but left his two buddies behind. I had them two within 40 yards several times but just couldn't see them so the youth that was with me took my gun that had more distance and crawled up to the edge of the field while I stayed where I was at. When he was ready I pulled out the slate and was working it and the mouth call. It wasn't but about a minute later and the remington 870 super mag released the fury on both ends. On one end was a dead bird and on the other end was a kids back touching the ground. We both jumped up and ran to make sure the bird wasn't getting up and maybe get a shot on the other bird. Some how I stepping on my striker along the way. When I entered the field the other gobbler was exiting and I couldn't get a shot. But we acomplished what we set out to do. This is his first longbeard. 10 inch beard, 3/4 inch spurs, 18 pounds.
Reply

longbeard2
First longbeard on the last day
Congratulations. It is tough when you only have one day to get it done.

Longspur321
That's good stuff
"the remington 870 super mag released the fury on both ends. On one end was a dead bird and on the other end was a kids back touching the ground."......

HAHA, that's the kind of stuff I love to read on here. Congratulations to both of ya'll. I know he wont forget that hunt.
Reply

imount
Good way to end the season
Congrats on sealing the deal. Really like reading turkey storys with happy endings. I bet you have been pictureing that day over and over again with a grin on your face. I have been looking a the super mag 870 turkey gun myself . It sounds like it really can do the job. I have a 835 mossberg with a jellyhead choke and it is a killing machine but I still fancy the 870. Congrats again on a good looking bird.
Reply