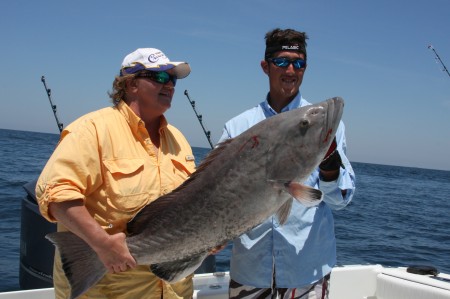 Staci Warner (a.k.a Geaux Coastal) and friends hit it just right as they heeded offshore for their FIRST bluewater trip on May 31st.

Due to a blown powerhead on one of Capt. Hunter's engines, they made a quick switch to Capt. Trey's beautiful 36-foot Yellowfin and had two captains to entertain them that day for the price of one!

Staci picks up the story from here:

As promised I am giving the rundown of our trip. I must say that I knew we were in for a treat when the two handsome Captains pulled up to the Marina in a beautiful 36-foot Yellowfin.

After introductions were made we were in the boat and headed out to the deep blue yonder. Once we got on a plane it was about an hour and a half later until the boat slowed down and I could crawl my butt out of one of those E-Sea Rider beanbags. If we wouldn't have caught any fish I would have to say the beanbags were the highlight of the day....for the women anyway.

Once we reached the section of the rip we were going to fish, Capts Hunter and Trey made the rigs up for trolling and we just trolled away for about 15 minutes and I was the first contestant up to battle a nice Mahi Mahi. About 10 minutes later that fish was gently placed in the iced coffin of fish death. 8 Mahi Mahi later it was time for something else, I just didn't know it was gonna be a BLUE MARLIN. We never hooked the darn thing, but the Capts sure gave it everything they had to make the hook up. I witnessed my first in experience seeing that blue beauty come out of the water while crashing bait AWESOME!!

Well after the Marlin experience we got on plane and ran to a shrimp boat that might be holding tuna behind and under it. The tuna were a no-show, so back on plane we went to a good sized rig and Capt Hunter kept us in position and the 6 of us went to fishing our little fish hearts out.

Capt Hunter handed me a rod with a heavy silver jig bait on it and he told me to drop it to the bottom and give it a jerk or two and reel just a bit. Well on the second jerk and reel combo something hugh hit the bait and meant some business. After reeling and reeling and reeling and reeling some more (it is a heck of a long was down to the bottom by the way) a 42.8 pound gag grouper was laying on the deck. Several red snapper were caught and released as the next day (June 1) was opening day of the season.

Next, a school of lemon fish (cobia) came to the boat and 2 were pulled out of that bunch. One of the Beckys hooked an unknown fish and it was released. Someone hooked an AJ and brought it in while I was getting beat down by the gag grouper. Two boats of divers pulled up and hooked to the rig and when they went over our bite was off.

Hit a few more rigs with only red snapper for luck. Headed back in a bit early and I took me a nice siesta in the bean bag until I felt the boat come off plane and looked up and saw tree tops. Forty-five minutes later we were on our way back to the cabins with ice chests full of fillets.

Well that was it and I am ready to go again! Great time out on the water and it was the most beautiful water I've ever seen."

We are glad you finally got to see some blue water, Staci, and look forward to getting you hooked up to a yellowfin on your next trip."

There are some grat July, August and September dates still available, along with a few weekdays in June. Give me a call and we'll set you up on the 32-Twin Vee, 36-Yellowfin, 34-Contender or 31-Gravois cat.