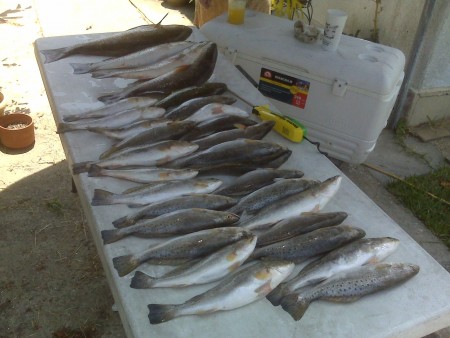 Couldn't get my teenager out of bed Saturday morning, again,
So I made a solo trip out of Delacroix. Got a real early start (for me) and made my first stop in Lake Campo and that was all it took for the trout limit. Live shrimp under a cork was what they wanted.
about 1 in 4 throwbacks. tried to get them switched over to plastics but they didn't seem to want anything but shrimp.

25th trout was in the box at 8:00. I started looking for red fish, hitting broken marsh with a purple/ white cocahoe under a cork on my way back to the landing going through False River. Caught the 1st red and tried to flip him in the boat (like a dumbazz) and broke my rod. Poled after the cork but he got off in the grass. By this time it was about 11:00 and HOT. I made one more stop in Shell Lake, nothing, so I was throwin in the towel; as I was going up the north south canal out of the lake and turned into Bayou Long I saw a school spook in a flat off the bayou so I stopped and eased over there and when they settled down there were tails everywhere. Caught my 5 reds in 5 casts then played catch and release till I was worn out and HOT.
I Thought I would try different lures, different retrieves and see what worked and what didn't but I don't think I learned anything because they hit everything I threw at them. I bet there were 200 reds in that school in that little flat I've only seen that a couple of times it was really cool. I ended up with 2 limits, a bass and a sheepshead. FUN!
(there's only 4 reds in the pic one got donated to a neighbors grill b4 I got home)
Reply

Sounds and looks like you had a great morning. Seems that everyone agrees that it is HOT out there. I've only seen a feeding frenzy of reds one time and what a sight it was...
I like the pic of the red in the water headed for the boat.
I'll bet your son wishes he would have got up now!

jay1962
It was awesome; It looked like they were circling the flat around and around
Reply

08rdskeeter
We went out of the Rigolets Saturday and Didn't catch Squat! We are beginners on the Saltwater fishing. My wife and I are planning on going somewhere this Saturday but not sure where to go.. May have to go try Delacroix!
Reply

jay1962
I just started fishing the area this spring; I used to fish Cocodrie and Grand Isle areas, but so far I've only had 2 trips that weren't real productive at delacroix and it's a lot closer for me. not always a limit but I haven't been skunked....yet. I go almost every weekend that the tides look good so you're welcome to follow me one weekend if you want and I'll show you what I've learned of the area so far
Reply

08rdskeeter
Thanks for the tip. Are those rigs between the Causeway and Hwy 11?

meauxjeauxx2
Yes they are.
You need to go to the rigolees launch for live bait though.
Not sure if there is bait any closer unless you catch your own.
Reply

Wishin I Was Fishin
Great Trip! Can't help but wonder, what did you son say when you came home with that mess of fish?
Reply

jay1962
Actually it was my daughter. She didn't have much to say, she played it cool, but then again it's hard to get her excited about something that's not on youtube. Alas, I had 5 daughters but I now have two grandsons. One is just about old enough for me to start corrupting...I mean teaching to fish. If it would of been a son I'd of just drug him outta bed by the ankle and threw him in the truck like my Dad did me!
Reply