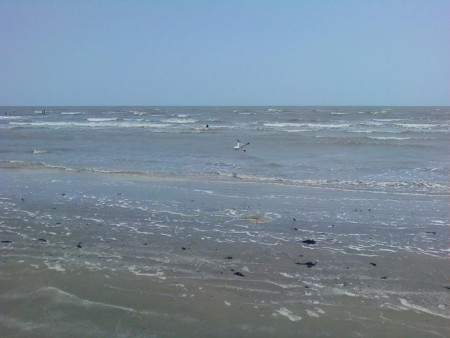 From all of the posts I've read you all seem to be very kind People there in Lousiana. I know what I am about to ask is a very odd request, but I seriously need someones help.
I have a very sick little boy on my hands. He was taken to 1 of 6 of the Holly Beaches. The adult with him read but disreguarded the Warning/ Advisory sign on the Beach. When he returned home I had to take him to the ER that was 7-13 he is still very ill.
(The ER doctor said I NEED to know what that sign says)
I have obtained Data from the Beach Monitoring Program- All of the Waters At 1-6 Holly Beaches are out of compliance, All are still under advisory, Swimming is still not Advised. Along with the Data I requested a photo of the Warning/Advisory sign. I did recieve one.
I am including two photos-one of my child in the water(he is the black dot) and the photo of the sign I was sent from the Beach Monitoring Program which was clearly not taken on the same beach. My son says that is NOT the sign he read but the color and wording are similar. He says the sign he read was diamond shaped it was blue and the words were white but he thinks it was a solid sign it did not fold in two.(He's not certian) He was excited to swim.
I need a photo of THAT sign. I need to know which of the 6 Holly Beaches it is located. The adult says it was at the end of Hway 27?
My son's description of the area and beach was this:
The place they parked was passed "the sign", to his left there were houses on stilts, in front of them were two buildings with different flags on top maybe 5 or 6 on each building, the beach was very very dirty, there was no grass and out in the water there were two white poles with distance between them with chicken necks attached to a long string.(Lol that's what he said)
All I know is that he said he did swallow water he was in it for 2 hours or more.
I would be happy to share all of the information I have obtained. To me, someone not native to the area, I personally feel it is a little alarming.
I am hoping there is somebody out there that would be willing to take a picture of that sign. Or all of the advisory signs on Holly Beach if they are not certian.
I do not know how to help my son if I do not have all of the information I need. Thank-You for your time.
Reply

Whysoserious
CALL THE STATE,
Man, I would call the LA Wildlife and Fisheries, State Police, Sheriff for the parish, pretty much everyone except a random internet sight if my son was sick. Good luck and I dont mean to be harsh. Hope your son gets better.
Reply

allboutspecks
???
clrjoat, Where do you live? I wish i could help but to far away for me. Are you to far away to ride and check it out? I would take a plane if it was my child. I hope someone can assist you with this water hazzard. Gary
Reply

allboutspecks
TRY THIS #
Holly Beach Rv Park
(337) 536-9824 Maybe some locals can help you. Hope everything turns out ok for you little boy. Keep us updated. GARY
Reply

JB
Sign
Call Department of Environmetal Quality. Sorry I do not have the number.
Reply

BIRD DOG
signs
I dont even know where Holly beach is but if it was my child I would be taken a ride.Why cant the doctors figure out whats wrong?What are the symptoms?
Reply

MAKO 1
Mako 1
There about 2 weeks ago Kids went in water for a while but nothing happened.
The signs reads SWIMMING ADVISORY ISSUED FOR THIS AREA
High levels of bacteria has been detected and swimming is NOT advised. Thsi advisory will remain in effect until bacteria levels are in compliance.
Reply

buckin quacker
I will help!
I live about 2hrs. from Holly beach. I will go ride and check out the signs for you. I have kids of my own I know how you feel. Comment back if you still need help.

LaElvis
Beach
Got this from another post on here....
Beach Warning
For all you folks headed down to Fourchon/Grand Isle this weekend, there is a warning posted. Nothing spectacular or really out of the ordinary, just a FYI. Be safe!! From the local paper:

HOUMA — Of 10 beaches at Fourchon and Grand Isle, seven are under a bacteria advisory this week, according to the state Department of Health and Hospitals.

An advisory is not a closure of the beach or its facilities but an alert to the public about possible unhealthy water conditions. All areas will remain open for boating, fishing and land-based activities.

This advisory is being issued because water samples collected at these locations showed high levels of enteric bacteria, which comes from human and animal waste.

These bacteria indicate the possibility of disease-causing organisms that can cause sore throat, vomiting, diarrhea, cramping or fever. Swallowing the water or dunking your head underwater increases the risk of illness.

It is especially important for the elderly, babies, small children and people who are chronically ill to be aware of this potential health risk. the department says. The advisory will remain in effect until samples show water bacterial levels are in a safe range.

The water sampling is conducted by Health and Hospitals’ Beach Monitoring Program, which tests water at beaches across the state to monitor the bacteria levels.

The program does not look into where the contamination might come from, according to Rene Milligan, a department spokesman.

“It’s not designed to look for sources necessarily,” Milligan said. “The sources could be natural.”

jnzd99
How is the little man?
How is your son? Do you still need the information from Holly Beach?
Reply

Tigerterror51
google
you can move on around on google maps...get in on street view and try to find the sign that way.
http://maps.google.com/maps

good luck
let us know how it turns out.
praying 4u
Reply

rduhon
Street maps
I don't think Google Maps will show Holly Beach. There isn't even a store there. Only about 5 houses and 5 camps. Nothing else.
Reply

mergansermaster
Sucks
I hope your boy is OK. Really bothers me that we can't even swim in our own waters in this great State. You don't ever get bacterial infections from swimming in Destin, FL. What the hell is wrong with us that we can get our act together and keep our waters clean. Total bull.
Reply

abeastandasavage
man i am so sorry!!!
i am so sorry for your son, i feel for you and your family, it breaks my heart what happened!!! but i got to tell you, when the government should do something, they dont!! seems like, when they know they have bacteria in the water that can be harmful, they just post a sign, no, close the beach, period, protect the people, because some parents or caretakers, just will let kids just go swimming, no matter, what the sign says! WHY, cause they are stupid, why would you take the slightist of chance, cant figure it out at all!! dont blame the sign, blame whoever was taking care of youre child, period!!! i will never understand some people can be so stupid!! my opinion!!
Reply

allboutspecks
Who Ownes This Post
Has anyone had any response from the person who posted this?
Reply

LaDoc1
Help?
What are the symptoms? Could he have the Flu? Seen multiple cases in the past week. People present with really high fever, muscle aches and oddly enough nausea/vomiting. I hope he is feeling much better and my prayers go out to you and your family.
Reply

Bass-N-Bucks
bass-n-bucks
I saw friday on the news that there's a bacteria in the water there.
Reply

clrjoat
Thank-You
Thank-You for your response. These are the two bacteria's they are testing for. They started the testing in May and will continue till October 31st. Fecal Coliform and Enterococci looks like they test every week. At Holly Beaches in the Data I have Have Not been in compliance At all.
Reply

clrjoat
Not the Flu.
Thank You LAdoc1 for your reply at the website for Louisiana department of Health and Hospitals under the Beach Monitoring Program on that page to the left there is Common Pathogens in Costal Louisiana Waters it list Disease Causing Microorganisims in Sewage/ Some illinesses and Symptoms my son has ALL symptoms listed for: Bacteria, Protozoa and Worms. The Two tests which appear to be run every week are Fecal Coliform and Enterococci. He is feeling a little better he is still feeling abdominal pain/cramps, diarrhea, chest pain, restlessness, digestive disturbances no more fever.
Reply

clrjoat
I'm So Thank-Full To ALL of You
The original post was my very first post Ever so please be patient with me. I started to post an answer as I read them but it didn't match it up with your reply's. I feel like I should Email each of you individually. Thank-ALL OF YOU. My little boy is going to be okay.
I am his mother.
I am in Tennessee and totally outraged that the adult who took him is his Father. YES! He read the sign! I am trying my best to be calm and find out exactly what I need to know. I can not comprehend even the first photo that is of my child so far out there that if something like an undertoe, etc. happened how could you get out there to him. ALL OF YOUR INFORMATION IS ABSOLUTLEY GREAT. When I came across this site I knew somebody here would help me. What is disturbing to me is what is in thoses waters. They SHOULD be finding the source. From the Data the numbers sent to me from the Beach Monitoring Program NO WHERE and I've researched this since my son has been home tomorrow will be a week have I found what they are testing for well I'll tell ya! Fecal Coliform and Enterococci
At http://www.dhh.louisiana.gov under the Beach Monitoring Program it does list the Monitoring Sites/Most Recent Sample Date/Advisory Status.
Reply