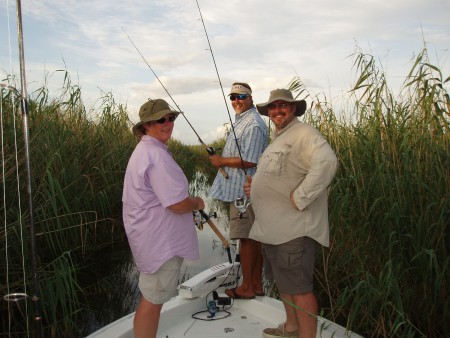 Jason Caldwell and his wife, Karen made the trip down from Arkansas recently. They joined Captain Peter Young and I for a late afternoon inshore trip on August 15th. This was their annual Venice excursion which was to have included an an offshore tuna trip as well, but a blown port engine on the 32-Twin Vee on our way out of the pass short circuited that plan.

With some afternoon tide movement, we opted instead to show them some of the crystal clear ponds off the East side of the river. They caught their first redfish on a gold spoon, as in past trips they had always fished with bait.

"We found it challenging and couldn't believe the size of the redfish!" Karen exclaimed.

Jason was celebrating his 40th birthday and we also took in the sights, sounds and food at the Empire South Pass Tarpon Rodeo to pass some time before our afternoon departure.

Congrats to Capt. Chris Wilson on his 2nd place finish with a 150-pound silver king.

Karen and Jason, you were fun to fish with as always.

If you want to get in on some late summer and fall redfish, trout and flounder action, give me a call and we'll get you set up with one of the top captains in Venice.